Get latest articles and stories on Business at LatestLY. After 69 years of its nationalisation Air India on Thursday formally became part of Tata Group, its founder. The government formally handed over the airline to Tata Group at a ceremony held in the national capital. 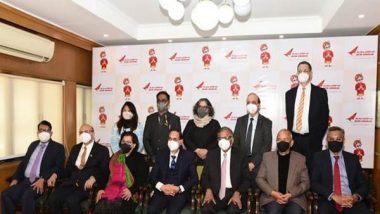 New Delhi [India], January 27 (ANI): After 69 years of its nationalisation Air India on Thursday formally became part of Tata Group, its founder. The government formally handed over the airline to Tata Group at a ceremony held in the national capital.

"The Air India strategic disinvestment transaction has been completed today with Government receiving a consideration of Rs 2,700 crore from the Strategic Partner (M/s Talace Pvt Ltd, a wholly-owned subsidiary of M/s Tata Sons Pvt Ltd), retaining debt of Rs 15,300 crore in Air India and AIXL and transferring shares of Air India (100 per cent shares of Air India and its subsidiary AIXL and 50 per cent shares of AISATS) to the Strategic Partner," the Finance Ministry said in a statement.

In a separate statement, Tata Group said it has taken over management and control of airline from today.

"Tata Group takes over management and control of the airline, starting today," the statement said.

Tata Sons Chairman N Chandrasekaran along with other senior officials of the company attended the handing over ceremony.

Talking to reporters after the handover ceremony Chandrasekaran said, "We are happy that Air India is back with Tata Group. We look forward to working with everyone in creating a world-class airline."

Department of Investment and Public Asset Management (DIPAM) Secretary Tuhin Kanta Pandey said all the disinvestment formalities have been completed and shares of Air India have been transferred to Tata Group.

"As we speak they (Tata Group) are the new owners," Pandey told reporters.

"We are excited to have Air India back in the Tata Group and are committed to making this a world-class airline. I warmly welcome all the employees of Air India, to our Group, and look forward to working together," Chandrasekaran said in a statement.

"We philosophically agree with the Prime Minister's vision for the aviation sector, of making it affordable and ensuring it contributes to boosting 'Ease of Living' for citizens," it added.

"It is pertinent to mention that following the Government's approval of the highest price bid of M/s Talace Pvt Ltd for strategic disinvestment of Air India, the Letter of Intent was issued to the winning bidder on October 11, 2021. The Share Purchase Agreement (SPA) was signed on October 25, 2021," the Finance Ministry statement said.

"Thereafter, Strategic Partner (M/s Talace Pvt Ltd), Air India and the Government worked towards satisfying a set of conditions precedent defined in the SPA including approvals from anti-trust bodies, regulators, lenders, third parties, etc. These conditions have since been met to mutual satisfaction," the ministry added. (ANI)