Business News | General Insurance Industry to Grow at 7 to 9 Pc in FY22: ICRA

The general insurance industry is expected to clock 7 to 9 per cent growth in gross direct premium income during FY22, investment information firm ICRA has said. 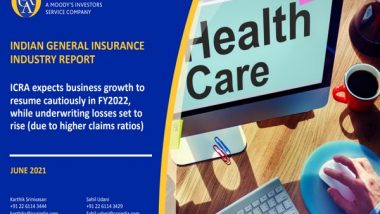 The uptick will be supported by growth in health and motor segments.

This will be supported by growth in health segment and uptick in motor segment.

"Despite underwriting losses, the sector is expected to report marginal return on equity (3 to 4.5 per cent) largely supported by investment income which is highly regulated by the Insurance Regulatory and Development Authority of India (IRDAI)," said ICRA.

In FY21, the industry witnessed a 4 per cent year-on-year growth to Rs 1.85 lakh crore. Public sector undertaking (PSU) entities were slower to adjust to an online mode of growth and the reliance on physical meetings was higher.

This resulted in a 2 per cent y-o-y decline in business at Rs 71,800 crore while the private sector reported 8 per cent y-o-y increase in gross direct premium income to Rs 1.13 lakh crore, said ICRA.

The health and personal accident business saw a growth of 12 per cent in FY21. PSU entities had a muted growth in FY20 at negative 2 per cent but saw a pick-up in growth during FY21 at positive 2 per cent.

The motor insurance segment has traditionally been the biggest segment for general insurance industry but its share has gradually declined from 46 per cent in FY16 to 37 per cent in FY21.

The fire insurance products accounted for 11 per cent of the overall gross direct premium income during FY21. The total premium rose 27 per cent in FY21 compared to a growth of 35 per cent in FY20.

The growth in FY20 was strong for both PSU and private sector players which increased market share in FY21. (ANI)