Get latest articles and stories on Business at LatestLY. Prime Minister Narendra Modi will flag off the new and upgraded version of the indigenously-built high-speed Vande Bharat Express between Gandhinagar Capital and Mumbai Central on Friday. This will be the third of its kind. 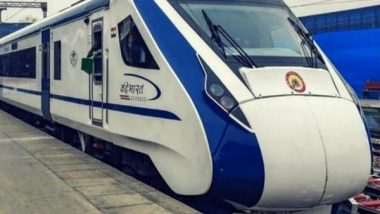 New Delhi [India], September 29 (ANI): Prime Minister Narendra Modi will flag off the new and upgraded version of the indigenously-built high-speed Vande Bharat Express between Gandhinagar Capital and Mumbai Central on Friday. This will be the third of its kind.

The first Vande Bharat Express train was flagged off on February 15, 2019, on the New Delhi-Kanpur-Allahabad-Varanasi route.

The government has dedicated significant efforts towards strengthening the 'Make in India' campaign, and Vande Bharat Express is one of the success stories.

In his address to the nation on August 15, 2021, from the ramparts of the Red Fort, Prime Minister Modi announced that during the 75 weeks of the Amrit Mahotsav of Independence, 75 Vande Bharat trains will connect every corner of the country.

Also Read | Wamiqa Gabbi Birthday: 5 Most Sensuous Pictures From Her Instagram That Will Rule Your Hearts.

What is unique about Vande Bharat Express?

Speed, safety and service are the hallmarks of this train. Integral Coach Factory (ICF), Chennai, a Railways Production unit, has been the force behind the system integration of these rails in just 18 months.

The Vande Bharat Express can run up to a maximum speed of 160 kmph and has travel classes like Shatabdi Train but with a better travel experience for passengers. This train is the next major leap for Indian Railways in terms of speed and convenience.

For example, the scheduled commute between New Delhi and Varanasi will take approximately eight hours making it 40-50 per cent faster than the fastest train currently connecting these two cities.

Besides, all coaches are equipped with automatic doors; a GPS-based audio-visual passenger information system, onboard hotspot Wi-Fi for entertainment purposes, and very comfortable seating. The executive class also has rotating chairs.

All toilets are bio-vacuum type. The lighting is dual mode -- diffused for general illumination and personal for every seat.

Side recliner seat facility which is being provided to Executive Class passengers will now be made available for all classes. The Executive Coaches have the added feature of 180-degree rotating seats. The train will also have bio vacuum toilets with touch-free amenities.

Every coach has a pantry with facilities to serve hot meals and hot and cold beverages. The insulation is meant to keep heat and noise to very low levels for additional passenger comfort.

Each Vande Bharat Express has a total seating capacity of 1,128 passengers

The Vande Bharat 2.0 trains have the KAVACH (Train Collision Avoidance System) for enhanced safety in operations. There will be improved security with four emergency windows added in every coach.

There will be four platform side cameras including rearview cameras outside the coach instead of two earlier. The new coaches have Level-II safety integration certification for better train control. The Vande Bharat 2.0 will also have better fire safety measures with Aerosol based fire detection and suppression system in all electrical cubicles and toilets.

A superior floodproofing for under-slung electrical equipment will be installed to withstand floods up to 650 mm in height compared to 400 mm earlier. The train will also have four emergency lighting in every coach in case of electric failure.

Soon, these trains will run across the nation. The new Vande Bharat Express being introduced between Gandhinagar Capital and Mumbai is the third Vande Bharat train in the country.

What does Union Budget for 2022-23 have for Vande Bharat Express?

Finance Minister Nirmala Sitharaman announced that 400 new-generation Vande Bharat trains will be developed and manufactured during the next three years. (ANI)