Get latest articles and stories on Business at LatestLY. Letz Vez, a plant-based meat brand launched during the pandemic with Ahimsa at its core, has shown steady growth and achieved notable benchmarks in a short span of time. The brand is eying a target revenue of INR 5 crores in the next financial year. 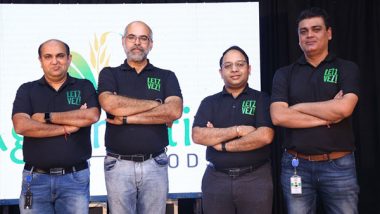 New Delhi [India], March 29 (ANI/SRV): Letz Vez, a plant-based meat brand launched during the pandemic with Ahimsa at its core, has shown steady growth and achieved notable benchmarks in a short span of time. The brand is eying a target revenue of INR 5 crores in the next financial year.

Letz Vez, a brand of Agromatic Nutrifoods, was launched in October 2021 at a Food Expo in Bengaluru. The first range of products included Kebabz, Keemah, Nuggetz, Pattiez, Popz, and Sausagez. Eventually, the brand, through various consumer surveys and experiments, expanded its range of snacks and added Schezwan Momoz, Tikka Momoz, Desi Momoz, Punjabi Samoza, Patti Samoza, Rollz, etc. to its list of products.

As a part of the initial marketing initiatives, the brand showcased its first range of products in several flea markets in Bengaluru to get a proper understanding of customer perception of plant-based meat. The positive feedback gave them the boost needed to accelerate work and scale up the business.

The target revenue comes as a part of the brand's future plans. Letz Vez plans to continue showcasing its products in flea markets across Bengaluru. The brand also plans to participate in college festivals, launch a jingle, a mascot, and rope in a celebrity brand ambassador.

Founder Vishal Baid Jain wanted to bring a change in the world, while also fulfilling his ambition to make a mark with a successful career. With the help of his co-founders, Sunil Baid Jain, Shreyans Singhi, Ashutosh Mishra, and a diligent team he was able to achieve it and more.

There is a shift in the consumption behavior trends with the majority of the population opting for a healthy, sustainable, and enjoyable diet. The onset of the pandemic was another catalyst that surged this shift in consumption patterns. More and more people have adapted to a plant-based diet to encourage health and mindfulness towards the environment.

The onset of COVID-19 proved to be a setback for Vishal Jain and his family as their revenues dwindled; however, it also posed as a blessing in disguise as it allowed him time to research new innovations in the food industry - a sector he wanted to foray into for a long time.

"My co-founder Shreyans Singhi had informed me about plant-based meat and how we could together do something in this emerging field. He suggested giving it a try considering the space is still very nascent in India. However, being a staunch follower of Jainism I was initially not convinced about the idea, as the word meat was going against my ideologies. It was a pressing dilemma because despite finding the concept interesting, I couldn't pour myself into it. After giving it much thought, I realized that this will be a great idea to consider because it will help people give up meat and switch to a plant-based diet. It was nothing but spreading the cause of Ahimsa (non-violence), which is one of the key elements of Jainism", said Founder Vishal Baid Jain.

Once Vishal and his team were resolved to start Letz Vez, they got in touch with several experts from some of the top institutions working in this space. They also participated in Karnataka Government's start-up incubation program and hired a food technologist to kickstart the process at their R&D center at CFTRI Mysuru. They were finally able to roll out their first range of products in October 2021.

Letz Vez does not use the term meat on its product packaging, a decision based on the fact that a lot of customers get dissuaded by the word 'meat' and do not even want to give these plant-based alternatives a try.

"We are learning every day and keep changing our communication to suit customer preferences. We never use plant-based promotional nomenclature such as chicken, meat, or mutton on our products because we want to cater to everyone, including vegetarians, who constitute around 30 per cent of the population of India - a huge number," concluded Vishal Jain.

This story is provided by SRV Media. ANI will not be responsible in any way for the content of this article. (ANI/SRV)