Get latest articles and stories on Business at LatestLY. InCarNation is back with the second edition of one of the most adrenaline-pumping, challenging and adventurous event of the country - Gumball India. The Gumball India 2021 drive will connect two extreme corners of India from Koteshwar in Kutch district of Gujarat in the west to Kaho, Anjaw District of Arunachal Pradesh to the east. 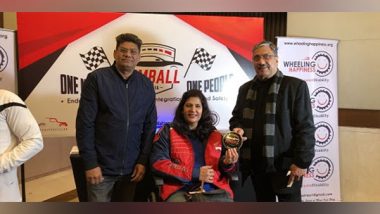 New Delhi [India], December 24 (ANI/NewsVoir): InCarNation is back with the second edition of one of the most adrenaline-pumping, challenging and adventurous event of the country - Gumball India. The Gumball India 2021 drive will connect two extreme corners of India from Koteshwar in Kutch district of Gujarat in the west to Kaho, Anjaw District of Arunachal Pradesh to the east.

Gumball India 2021 will be flagged from Koteshwar in Gujarat on Friday December 24, 2021, the westernmost tip of India and will end on December 28 at Kaho, the easternmost tip, in Arunachal Pradesh. The sixteen participating teams will face a tough 4,000 kilometres non-stop drive in order to be a finisher. Drivers from various cities including Guwahati, Kolkata, Delhi, Jammu, Hyderabad, Bangalore, Kochi are participating in this year's event.

The event is part of 'Aazadi Ka Amrit Mahotsav' - Celebration of India's 75 years of Independence under initiative by Arunachal Pradesh Tourism to promote domestic tourism in the state. To encourage more inclusiveness, the organisers, InCarNation Sports, have tied up with Padma Shri Deepa Malik, NGO Wheeling Happiness which will provide free entry to two teams of specially-abled drivers. Padma Shri Deepa Malik is the first Indian woman to win a medal in Paralympics Games and through her NGO Wheeling Happiness is working with people with disabilities for universal inclusion, awareness & disability rights.

Speaking of the event, Sudev Barar, Core Organiser of the event said, "This is the second year of Gumball India and we are extremely thrilled and humbled to bring Gumball India again, this time bigger and better. This driving competition is the toughest and most challenging event in the country. This challenge is not just about speed but more about endurance, grit and presence of mind. The secret to winning the challenge is one's endurance level along with following the best navigation system to travel to the finishing line via the shortest distance."

Also Read | Red Outfits for Christmas 2021: Six Celeb-Inspired Dresses To Style for a Spectacular Xmas Day! – This is fine.

All the participants will have to drive 4000-plus kilometres, virtually non-stop to reach the finishing point. The teams will have to navigate through fifteen secret checkpoints along the way that will be revealed to them at the start of the event. Participants are free to take any route they want as long as they check-in at all the intermediate checkpoints. All the participating member's cars will be monitored by a central tracking system which will keep track of distance, speed, driving time and stopping time and also passage check-ins and there will be a penalty applied for exceeding the speed limit.

The event will culminate with the Indian flag hoisting ceremony at Kaho village in Arunachal Pradesh and the result of the event will be declared on December 28 at 6:00 p.m. This is the second annual edition of Gumball India. Last year the event started from Kanyakumari.