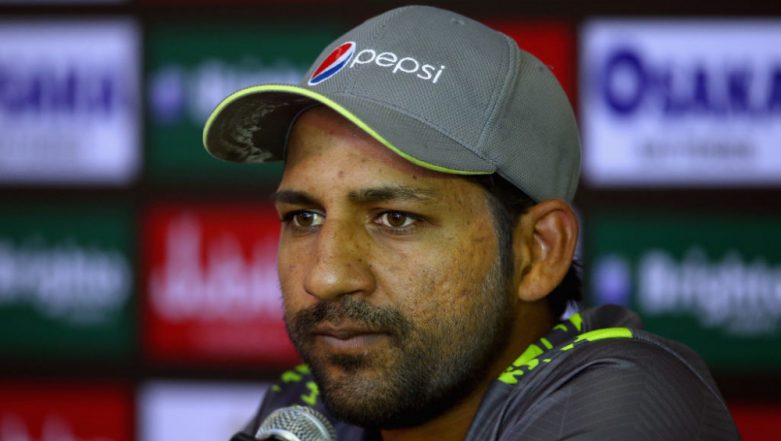 Karachi, February 22: Sarfraz Ahmed is "disappointed" that cricket is being targeted after the Pulwama terror attack and said the high-profile India-Pakistan World Cup game should go ahead as planned despite calls for the match's boycott from several quarters of the neighbouring country.

The Pakistan captain insisted that sports should never be mixed with politics and said in the interest of the cricket crazy fans of both the countries, the match should be played. Sachin Tendulkar Bats For India vs Pakistan in ICC Cricket World Cup 2019, Says ‘Would Hate to Give Away Two Points’.

"The India and Pakistan match should be played as per schedule as there are millions of people who want to watch this game. I just don't think cricket should be targeted for political gains," Sarfaraz told the CricketPakistan.com.pk website.

"It is disappointing to see cricket being targeted after the Pulwama incident. I don't recall Pakistan ever mixing sports with politics," he said.

The fate of the much-anticipated World Cup match to be held on June 16 at the Old Trafford lies in limbo after several former Indian cricketers called for its boycott in the aftermath of the ghastly terror attack that killed more than 40 CRPF personnel. "Sports should just be taken as sports," Sarfaraz added.

The call to boycott the match has come from some prominent names in Indian cricket such as senior off-spinner Harbhajan Singh and former captain Mohammed Azharuddin.

But offering a different view, batting great Sunil Gavaskar and Sachin Tendulkar have stated that India should not hand over points to Pakistan by boycotting the game. They, however, advocated continued shunning of bilateral cricket ties.

The Committee of Administrators (CoA) running Indian cricket also decided against taking any stand on the World Cup clash against Pakistan, but urged the ICC and other nations to "sever ties" with countries from where "terrorism emanates".

Former Pakistan captain and batting great Javed Miandad too was of the view that the game shouldn't be targeted.

"I felt bad after hearing about our pictures being removed from their (Indian) stadiums. Now this talk of boycotting the World Cup. I think India need to understand they can face consequences of such an action," Miandad said.

"I don't understand the mindset. Do they really think they (India) can get away without playing the World Cup match?" he asked.

He said India need to change its policy of mixing sports with politics. "I just hope better sense prevails."