The 50-year-old actor said he is enjoying every bit of playing the Star Wars character. 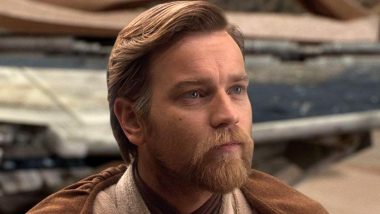 Actor Ewan McGregor says reprising his legendary "Star Wars" role of Obi-Wan Kenobi for the upcoming Disney Plus limited series has been an absolutely brilliant experience. The 50-year-old actor said he is enjoying every bit of playing the character he first essayed in George Lucas' "The Phantom Menace" (1999). He came back for its two sequels -- "Attack of the Clones" (2002) and "Revenge of the Sith" (2005) -- with the latter marking his final appearance as the character. Disney+ Obi-Wan Kenobi Series Final Cast Revealed! Joel Edgerton, Kumail Nanjiani Join Ewan McGregor’s Star Wars Series.

Teasing his return to the franchise during an appearance on CBS Sunday Morning, McGregor said, "I'm not saying anything! But to come back to play him again, Obi-Wan Kenobi, has been absolutely brilliant. I'm really enjoying it."

The Golden Globe winner said he has been avoiding questions related to his "Star Wars" come back since 2005. "That was annoying," McGregor said. "Every interview I ever did for, you know, years, people would say, 'Well, are the rumors true?' " "And I'd have to sort of, I'd have to lie. I'd have to say, 'Well, you know, I don't know. I'd be happy to play him one day again. Game Of Thrones Actor Indira Varma Boards Ewan McGregor’s Obi-Wan Kenobi Series on Disney+.

' I'd have to just keep saying … It started looking like I was sort of asking Disney for a job," he added. Obi-Wan Kenobi is one of the most pivotal characters of the "Star Wars" universe. He was first portrayed by legendary actor Alec Guinness in the original 1977 movie "A New Hope". Guinness later appeared as a force ghost in the two-follow-ups -- "The Empire Strikes Back" (1980) and "Return of the Jedi" (1983). The limited series, based on the character and starring McGregor, was announced in August 2019.