Addressing him as her 'most favourite' director, actor Kangana Ranaut extended birthday wishes to 'Thalaivi' filmmaker A. L. Vijay on Friday. 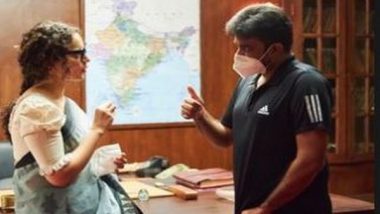 Taking to her Instagram Stories, Kangana posted a BTS picture from her upcoming film 'Thalaivi' that features her indulged in a deep conversation with Vijay.

Alongside the picture, she wrote, "Happy birthday to my most favourite director to work with, Thalaiva of film Thalaivi. Best wishes sir, can't wait to see the film," with folded hands emoticon.

On a related note, Kangana shares a special bond with director Vijay. Back in March, the actor got emotional and broke down while talking about her bond with Vijay at the trailer launch of the film 'Thalaivi' in Chennai.

She got teary-eyed and thanked him for encouraging her and believing in her talent as she ventured into the South Indian entertainment industry for the first time.

"Usually the camaraderie they show with male hero, is never shown with an actress. But as a Director, I learnt from him how to treat actors and how to show creative partnership," she added.

In an earlier social media post also, Kangana penned a heartfelt gratitude note for her director praising him after the completion of the film.

Tracing the journey of actor turned politician Jayalalithaa, 'Thalaivi' offers insights into the varied phases of the legend's cinematic as well as her political life.

The movie was set to release worldwide in Hindi, Tamil and Telegu by Zee Studios on 23rd April 2021; but due to a spike in the COVID-19 cases in India, the makers of the film postponed its release date. (ANI)