A week after reports claimed that a seventh season of Koffee with Karan was under production, host and filmmaker Karan Johar on Wednesday said his popular celebrity chat show will not return for a new chapter. 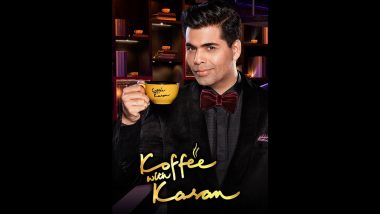 A week after reports claimed that a seventh season of Koffee with Karan was under production, host and filmmaker Karan Johar on Wednesday said his popular celebrity chat show will not return for a new chapter. The show, which first premiered on TV channel Star World in 2004, ran for six seasons till 2019. Koffee with Karan featured some of the biggest names from the world of Indian entertainment opening up about their personal and professional lives on the show, which would often hit the headlines. Rocky Aur Rani Ki Prem Kahani: Saif Ali Khan’s Son Ibrahim Spotted in Karan Johar’s Insta Story From the Sets of Ranveer Singh and Alia Bhatt’s Film.

Amid speculation that the cameras will start rolling in May for season seven, the 49-year-old director issued a denial in a Twitter note. "'Koffee with Karan' has been a part of my life, and yours, for 6 seasons now. I'd like to think we've made an impact and even found our place in pop culture history. And so, it is with a heavy heart that I announce that 'Koffee with Karan' will not be returning..." Johar said in the statement. Karan Johar’s Birthday Note For His ‘Student’ Varun Dhawan Is All Things Love!

Johar's close friends, superstar Shah Rukh Khan and Kajol were the first guests of the inaugural episode of the show, which went on to offer fans a rare and intimate peek into the off-screen dynamics of the film industry, cliques, friendships, and romantic equations of the stars, and at times, also sparked controversies. The celebrity guests would often engage into a candid conversation with the host about their vulnerabilities as public figures and the people they were behind the facade of a star.