Actor Kartik Aaryan on Friday went to seek blessings at Mumbai's famous Siddhivinayak temple on the occasion of Kartik Purnima. 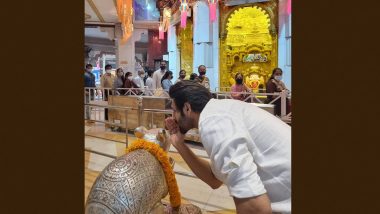 Actor Kartik Aaryan on Friday went to seek blessings at Mumbai's famous Siddhivinayak temple on the occasion of Kartik Purnima. Taking to his Instagram handle, the actor shared a picture in which he can be seen inside the temple, dressed in a white kurta. Shang-Chi Star Simu Liu Recounts His First Script Reading Session.

He further penned a caption, expressing his gratitude for all the love from the industry. "Aaj kaan mein sirf Thank You bola !! Ganpati Bappa Moriya. Feeling blessed with all the love coming from the industry. Can't wait for the fans to watch it!! #Dhamaka now LIVE on Netflix," he wrote. Bigg Boss 15: Rashami Desai, Devoleena Bhattacharjee Going to Be New Wild Card Entries – Reports.

Fans poured in love-filled comments at his post. "Aww so nice," a fan wrote. "All the best to Dhamakedar hero for Dhamaka," another added. Kartik's film 'Dhamaka' has released on Friday on Netflix. The film also stars Mrunal Thakur in a pivotal role. Directed by Ram Madhvani, 'Dhamaka' follows the story of an ambitious ex-news anchor Arjun Pathak, played by Kartik, who is given another chance to go live on prime-time television when a terrorist calls him with a bomb threat. Little does he know that this call will change his life and throw him into a fast-paced game of betrayal. Amruta Subhash, Vikas Kumar and Vishwajeet Pradhan are also a part of the upcoming movie.