Prince Harry has indeed learnt a lot from his personal mental health struggles and in a recent episode of The Me You Can't See, he revealed how supporting his wife Meghan Meghan taught him how to listen to others opening up about their battles with suicidal thoughts. 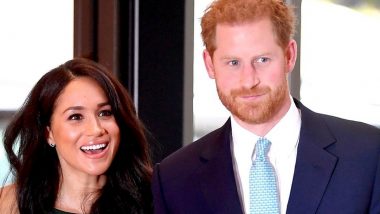 Prince Harry has indeed learnt a lot from his personal mental health struggles and in a recent episode of The Me You Can't See, he revealed how supporting his wife Meghan Meghan taught him how to listen to others opening up about their battles with suicidal thoughts. Page Six has learnt that the 36-year old royal said that he feels better equipped to respond to people opening up about their battles with suicidal thoughts after supporting his wife through her own struggles. The Me You Can’t See: Here’s Why Prince Harry Volunteered to Take Therapy on Camera For Apple TV+ Docu Series.

In the Thursday night's episode of his and Oprah Winfrey produced Apple TV plus docuseries 'The Me You Can't See', the Duke of Sussex spoke about the fear or shame that people might feel for not seeing that their loved ones were struggling or not knowing how to respond. "So many people are afraid of being on the receiving end of that conversation because they don't feel like they have the right tools to give the right advice," Harry said, according to Page Six. Prince Harry Reveals How Pregnant Meghan Markle Overcame Her Suicidal Impulses.

"But what you want to say is you're there. Listen, because listening and being part of that conversation is, without doubt, the best first step that you can take," he advised. In an earlier episode of the series, Harry made several shocking revelations including how he had panic attacks at the age of 12 after his mother, Princess Diana died in a car accident. The Duke broke down during his conversation with Oprah while disclosing how his wife Meghan overcame her suicidal impulses while she was pregnant with their son- Archie.

He shared that Meghan did not act on suicidal impulses while pregnant with their son because she did not want her husband to be hurt by the loss of "another woman" in his life. On a related note, the 'The Me You Can't See' series announcement came after Harry and Meghan stepped away from their roles within the royal family and relocated to California in 2020. Since then the couple, have pursued many of their ventures jointly, like accepting positions at BetterUp and Aspen Institute.

While promoting his docuseries, Harry made bombshell revelations about the royal family including criticising his father Prince Charles for his lack of parenting skills following which the royal aids have been demanding him and Meghan to strip of their titles. 'The Me You Can't See' is a docuseries co-created by Oprah and Harry that explores mental health and emotional well-being with stories from people around the world. With storytelling at its core, this timely series gives a voice to stories that aim to seek truth, understanding, and compassion.

Helmed by Academy Award and four-time BAFTA Award-winning filmmaker Asif Kapadia, the series is co-directed and executive produced by Emmy Award and Spirit Award nominee Dawn Porter. All the episodes of the series are available to stream on Apple Plus TV.