Get latest articles and stories on Entertainment at LatestLY. Actor Sonam Kapoor and her husband Anand Ahuja never leave a chance to express their love for each other publically. 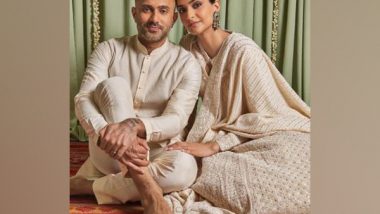 New Delhi [India], November 7 (ANI): Actor Sonam Kapoor and her husband Anand Ahuja never leave a chance to express their love for each other publically.

The former on Sunday shared a delightful picture with her husband from the Diwali celebrations at their London home.

Also Read | Wicked: Ariana Grande to Star in the Film Adaptation of Broadway Musical Along With Cynthia Erivo.

Taking to her Instagram handle, Sonam shared three pictures featuring her with Anand from the Diwali celebrations at the couple's London home.

The duo could be seen twinning in an ivory coloured ensemble. Addressing her husband as her 'whole universe', Sonam captioned the post as, "My whole universe and everything that matters the most. I love you @anandahuja #everydayphenomenal #diwali."

Soon after the pictures were shared on the photo-sharing platform, they accumulated thousands of hearts and comments from the fans and fellow celebrity followers.

Anand also replied to her 'jaan' by saying, "sooo cute my Jaan! ... I told you though in that first pic my one eye is closed. My one eye blinks faster than the other I think."

Sonam tied the knot with the Bhaane label owner on May 8, 2018, in an Anand Karaj ceremony, later followed by a star-studded reception. They celebrated their third wedding anniversary earlier this year.

Meanwhile, on the work front, Sonam will be seen in 'Blind'. She was last seen in the 2019 release 'The Zoya Factor'. She also had a cameo role in Anil Kapoor and Anurag Kashyap's 'AK vs AK', which had released on Netflix last year. (ANI)