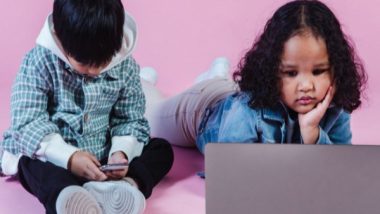 The results of the study were published in the 'Journal of Physical Activity and Health'. Also Read | COVID-19 Alters Fight-Or-Flight Response in Healthy Young People: Report.

The study showed that six hours of leisure-time physical activity per week at the age of 11 reduces the risk of being overweight at 14 years of age-associated with heavy use of digital media. Obesity in children and adolescents is one of the most significant health-related challenges globally. Also Read | COVID-19 Infections May Be Prevented in Older Adults By Using 100-Year-Old TB vaccine, Says ICMR.

The study carried out by the Folkhalsan Research Center and the University of Helsinki investigated whether a link exists between the digital media use of Finnish school-age children and the risk of being overweight later in adolescence. In addition, the study looked into whether children's physical activity has an effect on this potential link.

More than six hours of physical activity per week appears to reverse the adverse effects of screen time. The study involved 4,661 children from the Finnish Health in Teens (Fin-HIT) study. The participating children reported how much time they spent on sedentary digital media use and physical activity outside school hours.

The study also took into account other factors potentially impacting obesity, such as childhood eating habits and the amount of sleep, as well as the amount of digital media use and physical activity in adolescence.

In spite of the confounding factors, the protective role of childhood physical activity in the connection between digital media use in childhood and being overweight later in life was successfully confirmed.

Activity according to recommendations

"The effect of physical activity on the association between digital media use and being overweight has not been extensively investigated in follow-up studies so far," said Postdoctoral Researcher Elina Engberg. Further research is needed to determine in more detail how much sedentary digital media use increases the risk of being overweight, and how much physical activity is needed, and at what intensity, to ward off such a risk.

In this study, the amount of physical activity and use of digital media was reported by the children themselves, and the level of their activity was not surveyed, so there is a need for further studies.

"A good rule of thumb is to adhere to the physical activity guidelines for children and adolescents, according to which school-aged children and adolescents should be physically active in a versatile, brisk and strenuous manner for at least 60 minutes a day in a way that suits the individual, considering their age," said Engberg. In addition, excessive and extended sedentary activity should be avoided.