Get latest articles and stories on India at LatestLY. Samajwadi Party leader Azam Khan was released from Sitapur district jail on Friday, a day after the Supreme Court granted him interim bail in an alleged case of cheating. 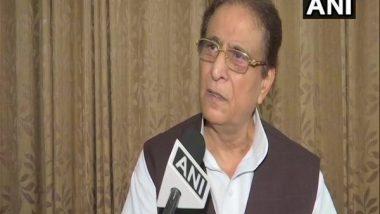 Sitapur (Uttar Pradesh) [India], May 20 (ANI): Samajwadi Party leader Azam Khan was released from Sitapur district jail on Friday, a day after the Supreme Court granted him interim bail in an alleged case of cheating.

The SP leader was granted bail in a cheating case lodged at the police station in Rampur.

The Supreme Court also ordered that Azam Khan be released until the regular bail is decided by the competent court.

Azam Khan's son, Adeeb Azam Khan, welcomed the Supreme Court's decision and noted that they will directly go to Rampur after the release.

"I am very happy (with Supreme Court's order). We will go to Rampur directly (after the release)," said Adeeb Azam Khan, son of SP leader Azam Khan.

Earlier on Thursday, the Supreme Court granted interim bail to Samajwadi Party leader Azam Khan in another case of cheating.

A bench of justices L Nageswara Rao, BR Gavai, AS Bopanna granted interim bail to Khan and also allowed him to apply for regular bail before the concerned court within two weeks.

Earlier on Tuesday, the apex court had reserved the order on Khan's interim bail plea in the aforesaid case, as opposed by the Additional Solicitor General SV Raju, appearing for Uttar Pradesh state.

The Supreme Court had earlier expressed displeasure with the prolonged delay in the announcement of judgment by Allahabad HC on his (Khan's) bail plea and called it a 'travesty of justice'.

Last week, the Allahabad HC had granted Khan interim bail in the case related to wrongful possession of land.

Khan was lodged in Sitapur jail since February 2020 as many cases are registered against him. (ANI)