Get latest articles and stories on India at LatestLY. Andhra Pradesh Chief Minister YS Jagan Mohan Reddy on Thursday chaired a review meeting on airports, seaports, and fishing harbours with the officials. 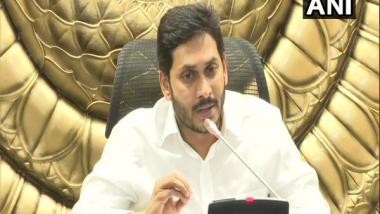 While discussing the seaports, the Chief Minister directed the officials to prioritize the construction of the three Greenfield ports in the state-Ramayapatnam, Machilipatnam, and Bhavanapadu ports. Officials notified the CM that the work on the Ramayapatnam port would begin soon.

As per state government information, in Phase 1, out of the 9 fishing harbours in the state, four are in the early stage of construction and likely to be finished by October 2022. Initial construction has commenced for the fishing harbours located in Uppada (East Godavari), Nizampatnam (Guntur), Machilipatnam (Krishna), and Juvvaladinne (Nellore) districts.

Officials informed that the construction of the 5 harbours will be completed as per Phase 2, within the stipulated time frame and their respective tenders will be finalized soon as well. Under Phase 2, fishing Harbours will be constructed in Budagatlapalem (Srikakulam), Pudimadaka (Visakhapatnam), Biyyaputhippa (West Godavari), Port (Prakasam), Kottapatnam (Prakasam) districts.

While discussing the Aviation Ecosystem in the state, the Chief Minister instructed officials to plan out the construction of the new airports, keeping in mind that every district should have one airport and each airport should be of standard size to support the commute and landing of small and large aircraft.

Officials were directed to focus on supplying and creating the necessary infrastructure to support the airports. They were also instructed to focus on the expansion and development of the 6 functioning airports in the state and to expedite the ongoing construction of the Vijayanagaram District Bhogapuram and Nellore District Dagadarti Airports as well. (ANI)