Pilgrims visiting the holy shrine of Kedarnath need not worry, said temple committee officials after an avalanche hit the mountains behind the Kedarnath Temple on Saturday morning. 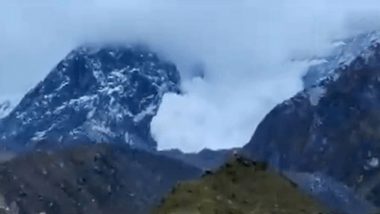 Rudraprayag, October 1: Pilgrims visiting the holy shrine of Kedarnath need not worry, said temple committee officials after an avalanche hit the mountains behind the Kedarnath Temple on Saturday morning.

"The pilgrims visiting Shri Kedarnath Dham need not be in any way afraid of this incident", said Ajayendra Ajay, president of the Badrinath Kedarnath Temple Committee. CEC Rajiv Kumar Writes to Over 2.5 Lakh Centenarian Voters, Thanks Them for Contribution in Electoral Process.

"At around 6.30 am, a huge iceberg broke off a glacier between Kedar Dome and Swargarohini and fell near the Chorabari lake located behind the temple. Plumes of snow were seen hanging over the lake for three to four minutes," Ajay told ANI. An avalanche occurred behind the Kedarnath Dham in the Himalayan region of Uttarakhand on Saturday, which scared the pilgrims visiting the holy shrine.

However, the BKTC chairman said, "No increase has been observed in the water level of Mandakini and Saraswati rivers from this broken iceberg and there was no need to panic". The temple committee president said that this incident happened in the Himalayan region, far away from Kedarpuri. "Such incidents are normal. It did not have any effect on Kedarpuri. Those arriving on the Kedarnath Dham Yatra need not worry" he added.  Seventh Day of Navratri 2022 Bhog for Kaalratri Puja: From Gajar Ka Halwa to Sabudana Vada, Orange Food Items To Try Out on This Fasting Day (Watch Recipe Videos).

Earlier the avalanche had occurred in the catchment of Chorabari Glacier at Kedarnath Dham on the evening of September 22. Chorabari Glacier is situated at a distance of about 5 km behind Kedarnath temple. It is raining heavily in the state for the last few days.