Bharatiya Janata Party (BJP) MP from Jalpaiguri Jayanta Kumar Roy on Friday alleged that he was attacked with bamboo sticks by "some Trinamool Congress (TMC) goons" in Siliguri. 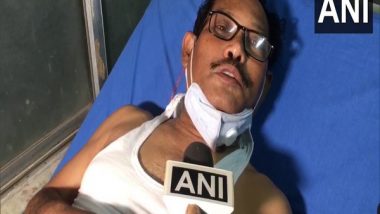 "Around 5pm today, I was attacked by TMC goons. They attacked me with bamboo sticks on my head and arms. A few others who were with me were also attacked. There is no rule of law in West Bengal," Roy told ANI.

Kumar was later rushed to hospital.

On May 24, a forum of concerned citizens including former judges, senior civil and police services and ambassadors had sent a memorandum to President Ram Nath Kovind seeking a SIT probe, monitored by retired Supreme Court Judge, into the post-poll violence in West Bengal and said these cases in the sensitive border state should be handed over to NIA to deal with the "anti-national onslaught on the culture and integrity of the country".

The memorandum, signed by 17 former judges, 63 former civil servants, 10 former ambassadors and 56 former officers of armed forces, said the "shocking nature and degree of retributive violence" in West Bengal after the election results "is the negation of the fundamental principle that there is no place for violence in retention of power or change of power through a peaceful democratic process under the Constitution of India".

The results of assembly polls in the state were announced on May 2 and the Trinamool Congress returned to power. (ANI)