Get latest articles and stories on India at LatestLY.In a significant development, the Central Bureau of Investigation (CBI) has arrested a serving Indian Navy officer along with two retired ones in connection with the leakage of confidential information related to the modernisation of a Kilo-class submarine going. 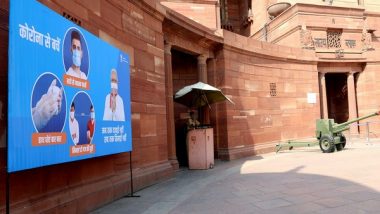 New Delhi [India], October 26 (ANI) In a significant development, the Central Bureau of Investigation (CBI) has arrested a serving Indian Navy officer along with two retired ones in connection with the leakage of confidential information related to the modernisation of a Kilo-class submarine going.

Top government sources told ANI that after the developments took place last month, the Indian Navy also ordered a high-level probe under a Vice Admiral and a Rear Admiral to probe the leakage of information and look for ways to prevent any such incident in the future.

"After getting inputs from agencies concerned, the CBI arrested a serving Navy officer of the rank of Commander (Lt Col equivalent in Army) who is currently posted in Mumbai for passing on unauthorised information related to the Kilo-class submarine modernisation project to retired officers," said sources.

The CBI has been questioning a number of other serving officers who were in touch with the arrested officers, they said.

The Indian Navy has been providing assistance in the ongoing investigations by the Central agency and providing its men for questioning by investigating officers, defence sources said.

The top brass of the government including the agencies looking after national security has also been given a briefing on the status of the investigations.

Sources said as soon as the matter was brought to the notice of the top Naval brass, they formed a five-member team headed by a Vice Admiral also started a parallel probe to investigate the matter and plug any other possible information leaks in the force and suggest ways to prevent them in future, they said.

Sources said the probe agencies have been monitoring the activities of a large number of ex-servicemen officers from all three services which lead to the arrests in the case. More arrests are possible as some more inputs have been received by them, they said.

Sources said the central agency is also checking the hardware and date accessed by the arrested officer in his official capacity and the possibility of it getting leaked to and external agencies.

A number of cases in the recent past have come up where defence personnel have been found compromised for leaking information to the suspected Pakistani agencies virtually. (ANI)