Get latest articles and stories on India at LatestLY. Maharashtra Chief Minister Uddhav Thackeray on Saturday slammed the Bharatiya Janata Party (BJP) and alleged that the BJP-led government is not speaking about inflation and that the "fake Hindutva party" has taken the country to hell. 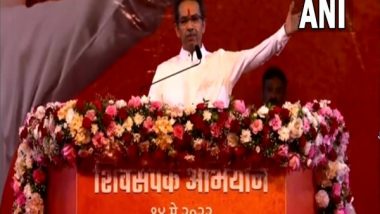 Mumbai (Maharashtra) [India], May 14 (ANI): Maharashtra Chief Minister Uddhav Thackeray on Saturday slammed the Bharatiya Janata Party (BJP) and alleged that the BJP-led government is not speaking about inflation and that the "fake Hindutva party" has taken the country to hell.

While addressing a public rally in Mumbai, Maharashtra, Thackeray said, "No one is speaking about inflation. We wasted our 25 years due to an alliance with BJP, they are the worst. The fake 'Hindutva' party which was earlier with us has taken the country to hell."

He further questioned what did the BJP do when a Kashmiri Pandit Rahul Bhat was killed by terrorists at Tehsil's office in Jammu and Kashmir.

Taking a jibe at the saffron party, he said that will they read Hanuman Chalisa there.

"Our 'Hindutva' is 'Gadadhari'. Rahul Bhat was killed by terrorists at Tehsil's office in J&K, now what will you (BJP) do? Will you read Hanuman Chalisa there?" he stated.

A Kashmiri Pandit named Rahul Bhat was killed by terrorists in broad daylight in Budgam district.

Earlier on Saturday, Shiv Sena MP Sanjay Raut pointed out that reciting the Hanuman Chalisa or switching off loudspeakers will not solve the problems of the Kashmiri Pandits and that the central government must take tough decisions to end the "atmosphere of instability" in the Union Territory.

The killing of Rahul Bhatt attracted condemnation from the J-K Governor and the BJP leaders who have alleged Pakistan's hand behind the targeted killing.

The loudspeaker row started when MNS chief Raj Thackeray held a rally in Aurangabad on May 1 and lambasted the ruling Uddhav Thackeray-led government on the issue of loudspeakers. He had set a May 3 deadline for the removal of the loudspeakers from mosques. He had also threatened that "his party workers would play Hanuman Chalisa with double the volume of 'Azaan' (Muslim prayers) in front of the mosques if the state government doesn't act within the deadline".

At the end of the deadline, a number of MNS workers were detained for allegedly trying to put up loudspeakers outside mosques to play Hanuman Chalisa. (ANI)