In a dig at the Centre, former Rajasthan deputy chief minister Sachin Pilot on Friday said those sitting in power are weakening constitutional institutions. 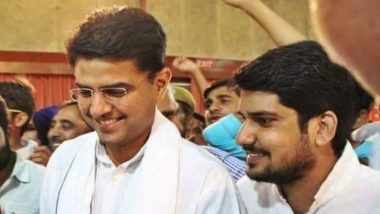 Jaipur, November 26: In a dig at the Centre, former Rajasthan deputy chief minister Sachin Pilot on Friday said those sitting in power are weakening constitutional institutions.

He said everyone played a role in the establishment of institutions in the country in the past 70 years and it is the responsibility of all to maintain democracy. Also Read | Lalu Prasad Yadav Admitted to AIIMS Emergency Ward Due to Fever and Drowsiness.

"But, today there is an attempt to weaken the foundation of various types of institution by people sitting in power," Pilot said attacking the Centre. He said winning and losing elections is a part of democracy but constitutional institutions should be maintained. Also Read | Uttarakhand Shocker: Retired Army Personnel Shots Wife To Death Before Killing Self In Dehradun.

Pilot said the recent cabinet expansion in the state has given a chance to every section of society and it will further strengthen the party.

"Today, I am happy that four Dalit ministers have been given cabinet rank. Our tribal brothers have got a chance. Farmers, Dalits, minorities and women have been given space," Pilot said.