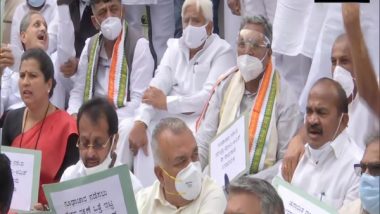 The party has also demanded the resignation of Home Minister Amit Shah.

These were led by PCC chiefs, CLP leaders, MLAs, MLCs, and party functionaries along with thousands of Congress workers and common citizens.

"There is tremendous outrage amongst Congress leaders and workers against the report of the tapping of phones of former Congress president Rahul Gandhi. People have taken great exception to the cowardly and deceitful act of snooping which includes many journalists on the surveillance list," the party said.

The release said Congress workers asked if alleged surveillance was done on the directions of the government and why the government is not ordering an inquiry.

The party said that "deeply shocking news reports" about "illegal and unconstitutional hacking of cell phones" have shaken the faith of the people in the BJP Government.

The party also held press conferences on the issue.

Referring to alleged surveillance, Rahul Gandhi had said that it is an attack on the democratic foundations of the country.

"It must be thoroughly investigated and those responsible be identified and punished," he said. (ANI)