Get latest articles and stories on India at LatestLY. Communist Party of India (CPI) Rajya Sabha MP from Kerala Binoy Viswam urged Railway Minister Ashwini Vaishnaw to restore the concession in the Railways for senior citizens which remained suspended since the outbreak of the COVID-19 pandemic. 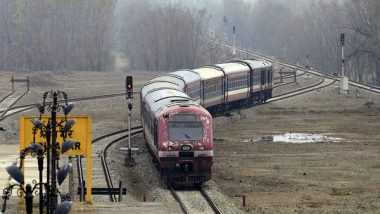 New Delhi, [India], May 23 (ANI): Communist Party of India (CPI) Rajya Sabha MP from Kerala Binoy Viswam urged Railway Minister Ashwini Vaishnaw to restore the concession in the Railways for senior citizens which remained suspended since the outbreak of the COVID-19 pandemic.

In a letter to the Railway Minister, the Rajya Sabha MP said, "Across the country, crores of senior citizens have been affected by the decision to withdraw concessions in railways given to them. The decision was made in light of the Covid-19 pandemic and has not been reviewed despite the repeated demands of the Senior citizens, as the country has opened up once again."

Also Read | #Amravati MP #NavneetRana Will on Monday Present Before Privilege Committee of the … – Latest Tweet by IANS India.

He further pointed out the fact that the Indian Railways was established with the primary purpose of providing citizens of India with an economical and efficient mode of transport.

"Over the years, over 50 categories of citizens, including senior citizens, were afforded concessions in order to make their travel affordable," he said.

However, with the onset of the COVID-19 pandemic, these concessions were halted in the name of safety and prevention, with the implicit belief that they would resume after the pandemic abated and the country opened up again, he added.

Kerala MP said, ''Unfortunately, the government has used the COVID-19 pandemic to permanently remove these concessions, much to the detriment of the people of India.''

He said that with over 7 crore senior citizens using the railways between March 2020-2022, the impact of the withdrawal of concessions was "significant".

''In light of this, I appeal to you to restore the concession for senior citizens in the Railways. As many senior citizens are not in a position to pay the full ticket fee, the lack of concessions causes them great hardship. ''Having served our country during their working life, it is important that we ensure that these citizens are afforded dignity and respect in their retired life,'' the CPI MP added. (ANI)