Delhi Police Crime Branch on Sunday busted a gang involved in black-marketing of Amphotericin B, an anti-fungal drug used in the treatment of black fungus, and arrested 10 people including one doctor. 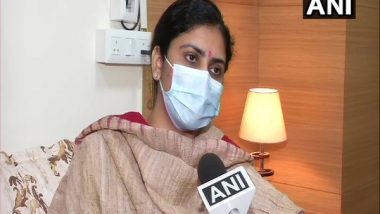 New Delhi, June 20: Delhi Police Crime Branch on Sunday busted a gang involved in black-marketing of Amphotericin B, an anti-fungal drug used in the treatment of black fungus, and arrested 10 people including one doctor.

Speaking to ANI, Delhi DCP Crime Monika Bhardwaj said, "During the investigation, we arrested one Dr Altmas Hussain, a resident of Uttar Pradesh's Deoria. He accepted to have purchased 300 expired vials of Amphotericin B. He repackaged and distributed Piperacillin/Tazobactam medicine as Amphotericin B." Amphotericin B Black Marketing Unearthed in Delhi Amid Rising Mucormycosis Cases, 2 Arrested.

"3000 vials of anti-fungal injections have been recovered from a house in Delhi's Nizamuddin. The investigation is underway to ascertain if all injections are fake," she added.

A team of Delhi Crime Branch, Chanakyapuri along with officials of Drug Controller was constituted and a trap was laid down near Jamia Metro Station, which led to an arrest of a delivery boy identified as Waseem Khan.

During the interrogation, he revealed that he came there to deliver Liposomal Amphotericin-B injection at the behest of person named Mayank Taluja, which was to be collected by him from one Faizal Yaseen, who worked as a salesman at Al Khidmat Medicos.

Thereafter, police raided Al Khidmat Medicos and recovered 10 vials of Liposomal Amphotericin-B. These vials have been sent for test/analysis by the Inspector of the drug department.