Delhi recorded 76 coronavirus cases and two fatalities while the positivity rate stood at 0.11 per cent on Tuesday, according to a health bulletin. 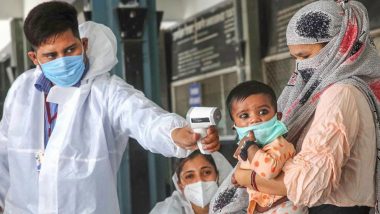 New Delhi, July 14: Delhi recorded 76 coronavirus cases and two fatalities while the positivity rate stood at 0.11 per cent on Tuesday, according to a health bulletin.

Eighty-four more patients have recovered from the disease in the last one day, it said. The Delhi government did not release the health bulletin on Tuesday.

On Monday, the city had recorded 45 COVID-19 cases, the lowest single-day rise in over a year, and three deaths while the positivity rate stood at 0.08 per cent. Delhi: Over 1,650 Black Fungus Cases Recorded Till July 6 in the National Capital.

According to covid19India.org, a crowd-sourced initiative that collects data on COVID-19 and vaccination in India, Delhi had recorded 17 cases on April 15 last year.

The city has registered 14,35,204 coronavirus cases since the pandemic started last year. As many as 14,09,501 lakh patients have recovered so far. The death toll stands at 25,020, the bulletin stated.

On Sunday, Delhi had recorded 53 cases with a positivity rate of 0.07 per cent and three deaths.

On Saturday, the city had logged 76 cases with a positivity rate of 0.19 per cent and one death.

The national capital had recorded 81 COVID-19 cases with a positivity rate of 0.11 per cent and three deaths on Friday.

A total of 214 people are under home isolation in Delhi, while the number of containment zones stands at 524.

The are 683 active cases in the national capital.

A total of 67,764 tests, including 41934 RTPCR/CBNAAT/TrueNat tests, were conducted on Monday, while the rest were rapid antigen tests, the bulletin added.

Delhi faced a brutal second wave of the pandemic that claimed a large number of lives daily. The rapid rise in the number of cases led to a shortage of medical oxygen at various city hospitals.