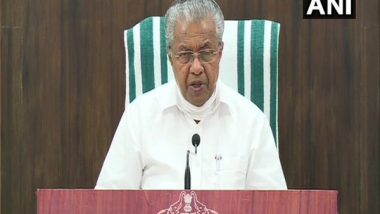 Thiruvananthapuram (Kerala) [India], June 11 (ANI): Kerala Chief Minister Pinarayi Vijayan on Friday said that the more dangerous Delta variant of the Coronavirus was more prevalent in Kerala during the outbreak of the second wave of Covid in the State and added that the threat of the second wave is now over.

Briefing the media here Chief Minister said there has been a decline in the number of patients and the prevalence of the disease in the state.

"The rush at hospitals is also declining. The lockdown was effective in controlling the spread of the disease. Kerala has also been able to reduce the death toll in a better way compared to other regions. However, the situation is not yet conducive to give full relaxation. The average test positivity rate (TPR) for the last three days is 13.9 per cent. The aim is to get it below 10 per cent at the earliest. Restrictions will be firmly enforced in local bodies with more patients. People should strictly follow the Covid protocol outside and at home, as well," he said.

He informed that more than 25 per cent of the population in the state has been vaccinated with the first dose.

"We are going ahead with the hope that the Center will provide the necessary vaccines. The staff of the ministers and the entire staff of the Government Secretariat will be vaccinated on priority," he said.

Chief Minister also stressed the need to maximise the gap between the second and the possible third wave in the state.

"There will be a higher causality rate if the next wave suddenly hits and peaks. Therefore, lockdown relaxations would be implemented cautiously and people should maintain the Covid norms even after the lockdown. Measures to further strengthen the healthcare infrastructure will be vigorously pursued during this time," he said.

He also assured that extensive measures are being taken to prevent infection among children considering the possibility of the third wave. "All preparations are being done to face the third wave and the infrastructure of all hospitals is being enhanced," Vijayan added.