Get latest articles and stories on India at LatestLY. Slamming the Bharatiya Janata Party (BJP) over the Gyanvapi Mosque row, AIMIM chief Asaduddin Owaisi on Wednesday said the ruling party at the Centre wants to take the country back to the 1990s when riots ensued. 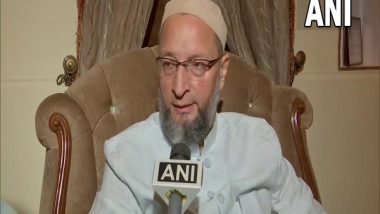 Hyderabad (Telangana) [India], May 19 (ANI): Slamming the Bharatiya Janata Party (BJP) over the Gyanvapi Mosque row, AIMIM chief Asaduddin Owaisi on Wednesday said the ruling party at the Centre wants to take the country back to the 1990s when riots ensued.

The AIMIM chief also took on Varanasi court's order that directed the area in the Gyanvapi mosque to be sealed where, the Hindu side claimed to have found 'Shivling' during the survey, and said that the order of the court was "wrong".

Speaking to ANI, Owaisi said, "The Supreme Court order stated that Muslims are allowed religious observance which means we can perform wazu there. It is a fountain. If it happens like this, then all the fountains of the Taj Mahal must be shut down. BJP wants to take the country back to the 1990s when riots ensued."

Earlier on Monday, the Varanasi court directed the district administration to seal the spot of the survey inside the complex where allegedly 'Shivling' has been found by the surveying team.

Also Read | Passenger Train Services Between India and Bangladesh to Resume from May 29.

Hearing the Gyanvapi mosque case on Tuesday, the Supreme Court ordered the Varanasi district magistrate to ensure the area where a shivling was purportedly found is protected without obstructing the Muslim community's right to worship.

Asked about Gujarat Congress Committee working president Hardik Patel's resignation, the AIMIM chief said, "Congress ruled Maharashtra for 15 years but now has become a party at third number while in Delhi, it is nowhere to be seen. Their people are leaving. Their (Gujarat) working president (Hardik Patel) has no confidence in the unofficial president and he left."

Hardik Patel, who resigned from the party on Wednesday, took a potshot at the state Congress leadership, saying that leaders are more focused on ensuring that the leaders from Delhi get "chicken sandwich" on time. (ANI)