The Karnataka government on Friday submitted before the Karnataka High Court that Hijab is not an essential religious practice of the Muslim faith and preventing it does not violate the constitutional guarantee of religious freedom. 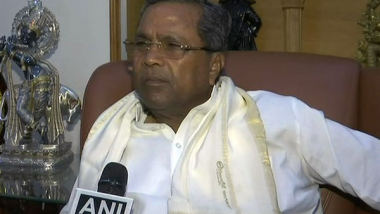 Bengaluru, February 20: Leader of the Opposition of the Karnataka Legislative Assembly, Siddaramaiah on Sunday stated that the Hijab ban in the educational institutions across the state was 'deliberate and intentional' with an aim to prevent the Muslim girls from getting educated.

Siddaramaiah said, "The code of uniform should have been prescribed at beginning of the session. Hijab ban in educational institutions in the month of January-February is deliberate and intentional. It's a conspiracy of the BJP to prevent Muslim girls from getting an education. It is at the instance of RSS that the development committee is prescribing the dress code under the chairmanship of Raghupati Bhatt. What is the harm to other students if somebody wears in hijab or turban to class? If students wear Cross, what is the harm to other students?"

Speaking on the Hijab controversy, the Leader of the opposition further added, "The govt could have solved this (hijab row) problem. If students can wear a turban, why can't students wear a hijab? Girls have been wearing it for a long time, there was no breach of peace then. Government is asking people to maintain peace is just drama." Zaira Wasim Reacts to Ongoing Hijab Controversy, Says ‘It Isn’t a Choice but an Obligation in Islam’.

The Karnataka government on Friday submitted before the Karnataka High Court that Hijab is not an essential religious practice of the Muslim faith and preventing it does not violate the constitutional guarantee of religious freedom.

Eshwarappa said that the saffron flag may become the national flag sometime in the future and maybe be hoisted on the Red Fort. According to the former Karnataka CM, Eshwarappa after insulting the national flag has no right to continue as a minister.