Get latest articles and stories on India at LatestLY. After the resumption of export of COVID-19 vaccines in October, India has exported 10 crore vaccines each to Nepal, Myanmar, Iran and Bangladesh under Vaccine Maitri, said the government sources. 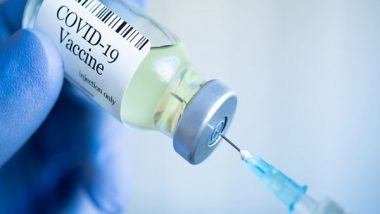 New Delhi [India], October 14 (ANI): After the resumption of export of COVID-19 vaccines in October, India has exported 10 crore vaccines each to Nepal, Myanmar, Iran and Bangladesh under Vaccine Maitri, said the government sources.

India has pressed the restart button to supply COVID-19 vaccines along with initial supplies in this round to the neighbourhood.

Made-in-India COVID-19 vaccines are in huge demand especially in the neighbourhood, it is learnt that during several diplomatic engagements, the majority of south Asian neighbours had time and again urged India to restart the export of vaccines.

India had to freeze its "Vaccine Maitri" program in early May this year as the country was severely hit by a deadly second wave of the COVID-19. It is the last month India announced that it is reopening the export of Covid vaccines.

During this gap of nearly five months, China entered this sphere and supplied a massive number of Sinapharm vaccines in the region.

However, the efficacy of the Chinese Sinopharm vaccine was always in question and people in the region have more trust in "Made-in-India" vaccines, a source told ANI.

One source told ANI that most south Asian countries are looking up to India for the vaccine supply to the region.

In the last few months, India ramped up its production and speeded its Covid vaccination drive in a big scale. Nearly 95 crore Indians have at least received the first dose of vaccine.

India's decision to reopen exports of vaccines is welcomed by the International community. Quad, the United States and countries of the European Union (EU) appreciated India's move.

India's step to open vaccine supplies is a major boost to the world in general and South Asia in particular. (ANI)