In line with the clarion call by Prime Minister Narendra Modi to double the farmers' income across the country by 2022, the Udhampur administration has helped the farmers in a panchayat in the district to achieve this goal successfully. 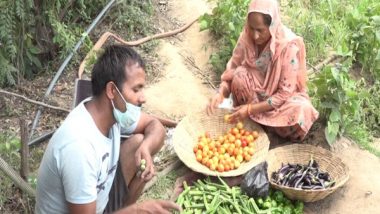 Udhampur (Jammu and Kashmir) [India], June 22 (ANI): In line with the clarion call by Prime Minister Narendra Modi to double the farmers' income across the country by 2022, the Udhampur administration has helped the farmers in a panchayat in the district to achieve this goal successfully.

Farmers in the Chatrari panchayat in Block Majalta of Udhampur have been growing multiple-season vegetable crops without the use of chemical fertilisers. Adoption of organic farming techniques during the COVID-19 pandemic, coupled with the modern equipment provided under various government schemes, these farmers now earn handsome income.

Prime Minister Narendra Modi had earlier gave a clarion call to double farmers' income by 2022 when India celebrates its 75th year of Independence.

A farmer from Chatrari panchayat, Vijay Kumar Verma, who has been farming for the past 5 years and grows vegetables like ladyfinger, capsicum, bottle gourd and cucumber, said he received multiple benefits under different schemes of the Government of India.

"The government has been helping a lot and I have received all possible benefits. Along with the subsidised seed and organic fertilizers, I also received a power tiller recently to help ease my work," he told ANI.

Thanking the Ministry of Agriculture, Vijay said, "Presently my income has increased threefold, and I would like to give its credit all to our Prime Minister. I would suggest all to shift to organic farming with the help of government."

"The Government of India and the district administration came as a ray of hope for us. More people are now eager to get back to farming," Dharam Singh, a farmer from Chatrari panchayat said.

He highlighted that multiple families who left farming in the past are now adopting it again due to government schemes for the upliftment of the farming sector.

"The double income is not only PM Modi's dream, but also his mission which will soon be fulfilled. Today it is our area which earns double income, soon it will be entire India."

Vaishnu Devi, a farmer from Chatrari panchayat, said, "The Agriculture Department has helped us from time to time and guided us. We also received modern agriculture equipment under the Government of India scheme. Now we grow all seasonal vegetables without any worry."

"Earlier, we used chemical fertilizers which are harmful and crop growth was also less. But now, after the use of organic fertilizers, our income has doubled," she added.

For all those who were unemployed due to the pandemic, the Department of Agriculture, Udhampur motivated them to shift back to farming, especially to turn to cash crops.

Subash Chander Sharma, Chief Agriculture Officer said that the department, along with providing the benefits under various schemes, has also ensured that the produce of these farmers are marketed well so that their income does not take a hit due to lack of marketing during the lockdown. (ANI)