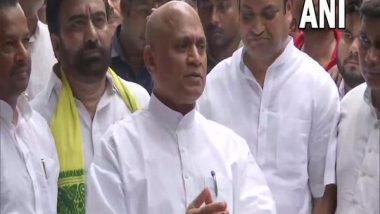 This came as pictures of Singh's presence at the BJP national executive meeting went viral on social media. RCP Singh, once a close confidant of Bihar Chief Minister Nitish Kumar and a Cabinet Minister in the NDA government from the JDU quota, was denied a ticket to Rajya Sabha by his party.

Sources said that Singh has not joined the BJP and continues to be with the JDU. They said that he was welcomed as an NDA leader at the airport in Hyderabad where the BJP's national executive meeting concluded on Sunday.

BJP MP Sushil Kumar Modi took to Twitter to dismiss speculations and said that the JDU leader must have come to Hyderabad in connection with the government program.

"This news is completely misleading that RCP Singh had joined the National Executive of BJP. He must have come to Hyderabad in connection with the government program and was welcomed by BJP workers present at the airport," he tweeted.

JDU has nominated Khiro Mehto to Rajya Sabha instead of RCP Singh.

Singh, who was the only minister from the JD(U) quota in the NDA government, is set to retire from Rajya Sabha on July 7. He will not be able to continue as Union Minister for more than six months once he ceased to be a Member of Parliament.