Yediyurappa has been waiting for some time now to carry out the cabinet exercise, as he was asked by the BJP president during their meeting in New Delhi on November 18, to wait for the clearance from the central leadership. 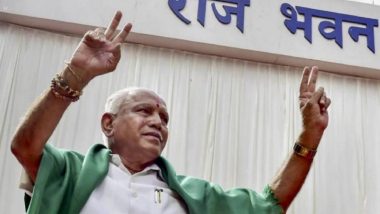 Bengaluru, January 11: Karnataka Chief Minister B S Yediyurappa on Monday said the much-awaited expansion or reshuffle of his cabinet will take place on January 13 or 14, and BJP National President J P Nadda will be invited for the swearing-in. Though the Chief Minister indicated that seven new faces will be inducted, he did not make it clear whether it will be cabinet expansion or reshuffle.

"On January 13 or 14 according to convenience of our national President J P Nadda and Karnataka in-charge (general secretary Arun Singh), by inviting them, swearing in ceremony will be organised," Yediyurappa said. Speaking to reporters here after paying tributes to former Prime Minister Lal Bahadur Shastri on his death anniversary, he said, about seven members will be inducted. Maharashtra: Roadside Hotel in Nagpur Set on Fire by Two Drunk Men After Owner Refuses to Serve Chicken; Case Registered.

Asked whether it will be cabinet expansion or reshuffle, he said, "let's see, you will get to know." Yediyurappa on Sunday had held discussions with Nadda and Union Home Minister Amit Shah in New Delhi about the cabinet exercise. On returning from New Delhi late on Sunday, the Chief Minister had said that seven members will be inducted on January 13 afternoon, and that he will finalise the names on Monday after discussions.

Yediyurappa has been waiting for some time now to carry out the cabinet exercise, as he was asked by the BJP president during their meeting in New Delhi on November 18, to wait for the clearance from the central leadership.

The cabinet expansion or reshuffle is expected to be a tightrope walk for the Chief Minister, considering that there are too many aspirants, from the party old guard to Congress- JD(S) rebels who are now BJP legislators.

While several of the old guards like Umesh Katti (eight-time MLA) and Arvind Limbavali are waiting for a chance to be inducted into the Ministry, Congress-JD(S) rebels like Munirathna, R Shankar and M T B Nagaraj, who helped the BJP come to power and are now party legislators, are also aspiring for slots. While Munirathna is now BJP MLA from RR Nagar, Shankar and Nagaraj are MLCs. Farmers' Protest Enters Day 47: Singhu Farmers Rename Protest Areas, Check Roads to Avoid And Alternate Routes to Take in Delhi Due to Agitation.

Yediyurappa had recently also indicated that MLC C P Yogeshwar, who is said to have played a key role by managing Congress-JD(S) rebel MLAs, during the political turmoil in the state in 2019, that eventually led to BJP to come to power, will be inducted into the Ministry. The cabinet currently has 27 members, and seven berths are still vacant.