In a paradigm shift, the lone Chief Minister from the Communist Party in the country, Kerala CM Pinarayi Vijayan has sought cooperation from the United States in all possible areas for the development of the state. 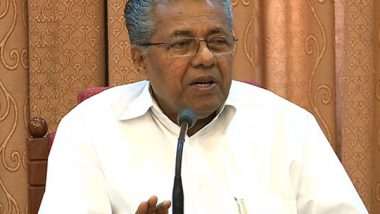 Thiruvananthapuram (Kerala) [India], August 1 (ANI): In a paradigm shift, the lone Chief Minister from the Communist Party in the country, Kerala CM Pinarayi Vijayan has sought cooperation from the United States in all possible areas for the development of the state.

An official release issued by Kerala Chief Minister's office here said that Pinarayi Vijayan in an online meeting with US Consul General Judith Ravin in Chennai requested US cooperation in all possible areas.

The Left parties including CPI(M) during the rule of United Progressive Alliance (UPA) had severed ties with Congress over Indo-US nuclear deal which had led to a dramatic trust vote in parliament in 2008, a year before Lok Sabha elections that followed.

Left particularly CPI(M) which had always opposed collaboration with US in past, however, is looking at US help in research and development activities in Kerala among other sectors.

"Kerala is trying to become a knowledge society. Chief Minister said that he expects assistance from the United States for research and development activities to facilitate this," said Kerala CMO in an official statement.

Further, Kerala Chief Minister also sought assistance in the education sector, industries sector and also in disaster management from the US.

"In January 2021, Kerala launched the Eminent Scholarship Online Scheme. This is a program where students from Kerala interact with experts from different parts of the world, where US can contribute. The Chief Minister also requested the services of experts from the US to strengthen research in the fields of science and technology as part of strengthening the industrial sector. The Chief Minister said that the United States can provide good support in this regard as well," read the statement.

It further stated that the US Consul General offered all possible support to Kerala's idea of becoming a knowledge society. Also, collaboration was promised to prepare a curriculum by experts from the United States in collaboration with experts in Kerala in connection with disaster management.