Get latest articles and stories on India at LatestLY. The normal life of people came to a standstill as floodwater from the Baitarani river inundated residential areas in parts of Bhadrak district. 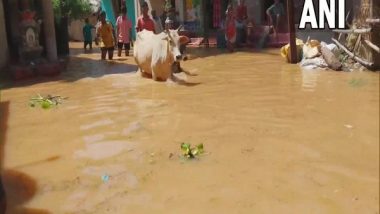 Bhadrak (Odisha) [India], August 17 (ANI): The normal life of people came to a standstill as floodwater from the Baitarani river inundated residential areas in parts of Bhadrak district.

According to the district administration, 80,000 to 90,000 people have been affected due to the flood situation.

"As of now, three blocks in Bhadrak district are affected due to floodwater. The administration took steps and boats along with other necessary help have been deployed. 80,000 to 90,000 people are affected," Siddeshwar Baliram Bondar, District Magistrate Bhadrak told ANI.

Meanwhile, Odisha Chief Minister Naveen Patnaik on Tuesday reviewed the flood situation in the state and directed the officials to ensure zero casualty due to flood and that there should be no disruption to normal life.

He said "there is a possibility of flooding in 10 districts of the Mahanadi river basin due to continuous rains. Therefore, he advised the Collectors of these 10 districts to be cautious and take all kinds of measures to prevent the flood situation."

Patnaik also directed officials to evacuate people in the risk-prone areas on a priority basis and provide them with necessary relief and basic facilities. He also directed the departments concerned at the state level to provide immediate assistance to the districts.

Chief Minister directed the officials to keep National Disaster Response Force (NDRF), Odisha Disaster Rapid Action Force (ODRAF) and fire service units on alert in various danger-prone areas and engage in rescue operations where necessary.Patnaik also asked to minimise the communication interruption and directed that life-saving institutions like hospitals, water supply and power supply systems should provide uninterrupted services. Panchayati raj and Drinking Water Department should make provision for clean drinking water in rural areas, Health Department should make special arrangements to provide health services to the people in the affected areas.He also suggested that the Department of Fisheries and Animal Resources should provide the necessary services for the protection of wildlife.According to the Odisha government, nine ODRAF teams in seven districts, nine NDRF teams in six districts and 44 fire services units have been kept on alert. (ANI)