A fire at the Kaza Toll plaza in of Guntur district of Andhra Pradesh onThursday burnt to ashes one lorry and two toll booths, officials said. 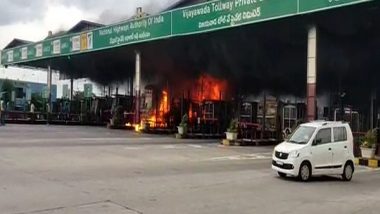 The cause of the fire is suspected to be bursting of a tyre of the lorry.

"A Fire accident took place at Kaza toll plaza when a lorry caught fire due to tyre blast. The lorry, an empty diesel tanker was headed to Guntur from Vijayawada. When the vehicle stopped at the toll gate to pay toll fee, all of a sudden its tyre burst and the lorry caught fire", Mangalagiri Rural Station Fire Officer said.

Two fire tenders rushed to the spot and doused the fire immediately.

The lorry was empty and nobody was injured in the incident, the fire officer said. (ANI)