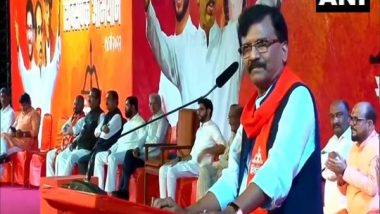 On being asked about Bharatiya Janata Party (BJP) slamming All India Majlis E Ittehadul Muslimeen (AIMIM) leader Akbaruddin Owaisi for paying his respects to the tomb of Mughal emperor Aurangzeb at Khuldabad in Aurangabad, he said, "Since 2014, Owaisi came in Maharashtra, Why didn't former Chief Minister Devendra Fadnavis stop him when he came to Aurangabad in their time."

Further, he said that Aurangzeb was born in Gujarat, while, Chhatrapati Shivaji Maharaj was born in Maharashtra.

"In Kashmir, in the past three months, 27 Kashmiri pandits were killed by terrorists. We see Rahul Bhat killed by terrorists in Budgam. Today and yesterday Kashmir pandit came on the road to protest against the central government and were detained in Kashmir," he alleged.

A Kashmiri Pandit named Rahul Bhat was killed by terrorists in broad daylight in Budgam district.