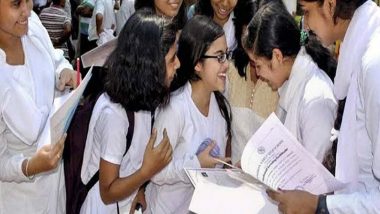 A total of 15,84,264 students had registered for the exam, of which 15,75,103 students had appeared to take the test. Also Read | Mohammad Azharuddin on Virat Kohli-Babar Azam Debate, Says 'Don't Believe in Comparisons'.

Of these, 15,01,105 candidates cleared the examination. The overall pass percentage stood at 95.30. Girls fared better than boys with 96.91 per cent and 93.90 per cent, respectively. Also Read | New Education Policy 2020: From Major Reforms in School and Higher Education To Digital Push, All You Need to Know.

The Konkan region scored the maximum percentage of 98.77 per cent, whereas the lowest was from the Aurangabad region at 92 per cent. As many as 22,570 schools took the exams, of which 8,360 recorded 100 per cent result.

Earlier, the results for the Higher Secondary Certificate (Class 12) exams were declared by the MSBSHSE on July 16 with 90.66 pass percentage.