According to officials, the gang had honey-trapped the man, made a video of him in an objectionable condition and used that to exploit him. 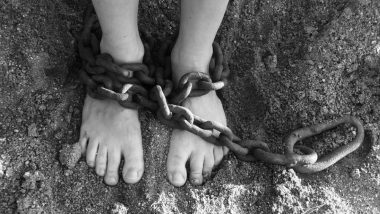 Noida, January 15: A 30-year-old Noida resident, who was held hostage for ransom in Ghaziabad after a honey-trap, has been rescued and seven people, including two women, arrested for the conspiracy, police said on Friday. The married man, a contractor by profession, had left home in Noida on Tuesday evening to meet "someone" at the FNG roundabout after a phone call but had not returned by night, they said.

"The next day his family approached the local Phase 2 police station claiming they have got a ransom call and have been asked to arrange Rs 2 lakh for safe release of the man," Additional Deputy Commissioner of Police, Central Noida, Ankur Aggarwal said.

The officer said an FIR was lodged immediately and the matter investigated.

According to officials, the gang had honey-trapped the man, made a video of him in an objectionable condition and used that to exploit him. Bengaluru Police Arrests Ex-Teacher Running Honey-Trap Racket Using Matrimonial Sites.

"A woman who had contacted him recently and got into frequent chats with him had called the man to FNG roundabout on Tuesday evening for a meeting, unbeknown to him that she was a member of a gang which was planning to abduct him," an official privy to the probe told PTI.

"When the man reached the decided spot, he was taken to Modinagar in Ghaziabad by the woman where the gang filmed the duo with an objective to blackmail him," the official said.

Later, the gang took him to a room in an isolated location where he was held hostage, according to the police. Additional DCP Aggarwal said a police team in civil dress rescued the hostage and nabbed the seven gang members from their hideout.

"A police team was formed by Phase 2 Station House Officer Anita Chauhan. This team approached the abductors pretending to be from the man's family and reached out to them in civil dress to trap the culprits," he said.

"Seven people, including two women, have been arrested by the police team and the hostage has been rescued safely. His Toyota Innova car has been recovered and three mobile phones used in the crime have also been seized," Aggarwal said.

An FIR has been lodged against the accused under Indian Penal Code sections 346 (wrongful confinement), 389 (putting a person in fear of accusation of offence, in order to commit extortion), among others, he said, adding that further legal proceedings will be completed soon.