Hyderabad: One Worker Dies, Another Feared Dead While Cleaning Manhole 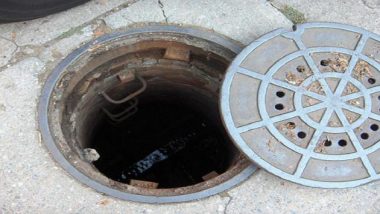 Hyderabad, August 4: A labourer died and another is feared dead while cleaning a manhole here, police said on Wednesday. The incident took place on Tuesday, the police said.

Search is on for the worker who is feared dead while the body of the deceased was retrieved, they said. It is not clear on how the death occurred, whether due to asphyxiation or drowning, a senior police official said, adding that a case was registered. Also Read | Maharashtra CM Uddhav Thackeray Inaugurates First-Ever Genome Sequencing Laboratory in Mumbai.

The Supreme Court had in 1993 banned employing manual scavengers. Any violation of the ban would entail up to two years of imprisonment to authorities employing a person directly or indirectly for hazardous cleaning of a septic tank or sewer, the apex court had said.