Get latest articles and stories on India at LatestLY. After the Defence Ministry's approval for the new scales of accommodation, military officers and jawans would get better and bigger furnished houses which would be built with the latest national standards. 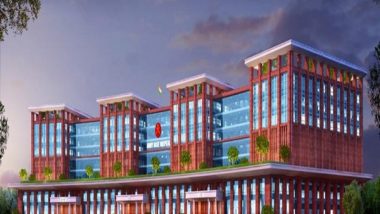 New Delhi [India], May 14 (ANI): After the Defence Ministry's approval for the new scales of accommodation, military officers and jawans would get better and bigger furnished houses which would be built with the latest national standards.

With Defence Minister Rajnath Singh's approval earlier this week, the new housing projects for military personnel would have multi-level parking facilities, multi-purpose indoor courts, 10 per cent more plinth area in houses and more electrical points would be provided in the residences to meet the requirements of the present times, Indian Army officials told ANI.

The approval for the new scales of accommodation has come after 13 years as the last review was done in 2009 only and since then, a lot of changes have come in the lifestyle of all personnel and their families, they said.

The officials said the new scales of accommodation approved by the government would definitely improve the quality of life of the military personnel across the ranks when it starts getting implemented.

Under the new scales, the military engineering services, which is the construction arm of all the three defence forces and the Indian coast guard headed by the Engineer-in-Chief, would also use renewable energy sources like wind, solar, geothermal, tidal and geothermal energy for meeting power requirements.

The residential areas of military personnel would also get new indoor sports complexes with additional basketball and volleyball courts.

The MES would now also build houses with modular kitchens and the luggage storage space in all married accommodations would also be expanded.

The finishing of walls, ceilings and flooring would also be done more aesthetically. The Military Engineer Services (MES) is one of the pillars of the Corps of Engineers of the Indian Army which provides rear line engineering support to the Armed Forces and associated organisations of the Ministry of Defence (MoD).

MES carries out multifarious construction activities for the Military stations/cantonments such as residential and office buildings, hospitals, roads, runways and marine structures across the country including border areas.