Get latest articles and stories on India at LatestLY. The National Education Policy (NEP) contributes to the nation while preparing significant human resources necessary for taking the country forward said Prime Minister Narendra Modi during the inauguration of the three-day Akhil Bharatiya Shiksha Samagam in Uttar Pradesh's Varanasi on Thursday. 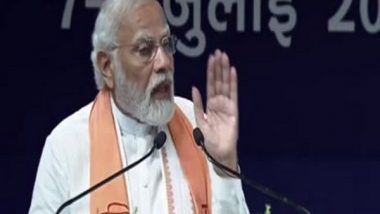 "The foundational aim behind the National Education Policy is to bring education out from the limits of narrow thought-process and to integrate it with the modern ideas of the 21st century," he added.

Speaking at the inaugural function he further said "We just don't have to prepare youth with degrees, it's imperative, that along with it, our education policy also contributes to the nation while preparing significant human resources needed to take the country forward."

As per the Ministry of Education, the three-day seminars will bring together over 300 Vice-Chancellors and Directors from public and private universities, educationists, policymakers, as also industry representatives to deliberate on how the implementation of National Education Policy 2020 can be taken further across the country after successful implementation of several initiatives in the last two years.

"The Summit will provide a platform for leading Indian Higher Educational Institutions (HEIs) to discuss, deliberate and share insights on strategies, success stories and best practices in implementing the National Education Policy, 2020," the Education Ministry had said in a statement.

The Ministry, along with UGC and AICTE, has brought in several policy initiatives like Academic Bank of Credit, Multiple Entry-Exit, Multi disciplinarity and Flexibility in higher education, regulations aimed at boosting online and open distance learning, revising the National Curriculum Framework to make it more in sync with global standards, promoting multi linguality and Indian Knowledge Systems and making both a part of educational curriculum, mainstreaming skill education and promoting lifelong learning, to name a few.

The Summit is expected to provide a platform for thought-provoking discussions that will articulate the roadmap and implementation strategies, foster knowledge exchange and build networks through interdisciplinary deliberations and discuss challenges being faced by educational institutions and articulate solutions.

The key highlight of the Akhil Bharatiya Shiksha Samagam will be the adoption of the Varanasi Declaration on Higher Education which will showcase India's extended vision and a renewed commitment to help achieve the goals of the higher education system, the Education Ministry added. (ANI)