Get latest articles and stories on India at LatestLY. Amidst the aggravating water crisis in Rajasthan, the Pali administration has made arrangements for water trains. 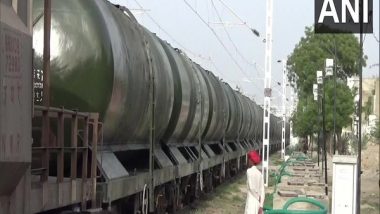 Pali (Rajasthan) [India], May 20 (ANI): Amidst the aggravating water crisis in Rajasthan, the Pali administration has made arrangements for water trains.

The city administration had stepped in with the arrangements to supply water to local residents.

The city residents claimed that they are facing the water crisis for the past 3-4 months. There is no timely water supply while water trains have come as a relief for them, said the local.

Shanta, a private school teacher, said that while the city administration has roped in water trains, the residents are still facing hardships as it takes time to fetch water and take it to their homes.

"Water is being supplied every 15 days, and there's no certainty about availability. We face difficulty in managing water even for cooking," she told ANI on Thursday.

She further said that while water scarcity has been in the city for around two months, the bare minimum supplies are also contaminated. She added that a new pipeline on the lines of the arrangements for water trains would have been helpful for the residents.

She also lamented that the councillor (Prashad) has not been listening to the problems of the residents.

However, another local Anil claimed that the city MLA Gyanchand Parakh (who has been in service for 25 years) has been regularly making efforts in fulfilling his promise to combat the water crisis in the city by reaching out to the collectorate, urging to resolve the problem related to water scarcity in the city.

Accusing the administration of only filling up their pockets, he said they have been told that the pipeline will take another 10-15 days as they are repairing its leakage.

"The solution could have been with a new pipeline. They (administration) are spending Rs 4 lakh for each water train, Rs 16 lakh a day (4 trains run each day)," he said. (ANI)