"Sab yaad rakha jaega" (Everything will be remembered) said Congress leader Rahul Gandhi on Thursday, hitting out at the Central government after it said no COVID-19 deaths had been reported due to shortage of oxygen. 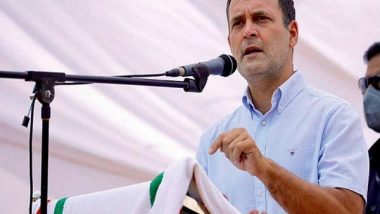 New Delhi [India], July 22 (ANI): "Sab yaad rakha jaega" (Everything will be remembered) said Congress leader Rahul Gandhi on Thursday, hitting out at the Central government after it said no COVID-19 deaths had been reported due to shortage of oxygen.

Taking to Twitter, Gandhi shared a video about the "truth of oxygen shortage" that said "Indian Government fails to protect Right to Life and Health in Second Wave of COVID-19 Pandemic."

It further showed pictures of people waiting in long queues to refill oxygen cylinders and an article about a Goa hospital where 75 people allegedly died due to lack of oxygen supply.

The Centre, while responding to a question by Congress MP KC Venugopal, had on Tuesday told the Rajya Sabha that no deaths due to lack of oxygen had been specifically reported by states and Union Territories during the second COVID wave.

In the written reply, Minister of State for Health Dr Bharati Pravin Pawar stated that health is a state subject and accordingly all states, UTs report cases and deaths to the Union Health Ministry on a regular basis.

The Bharatiya Janata Party, meanwhile, defended the statement saying that the Centre just collects data on COVID-19 deaths, it does not generate it.

"Health is a state subject and no state or union territory sent any data regarding deaths, specifically due to a shortage of oxygen," BJP spokesperson Sambit Patra said on Wednesday.

Several opposition leaders have widely criticised the Centre for the statement. Shiv Sena's Sanjay Raut said the government was lying. Delhi health minister Satyendar Jain called the statement 'completely false' and asked why hospitals were going to the High Court for shortages if there were no deaths due to lack of oxygen.

The Telugu Desam Party and Congress also refuted the Centre's claim and said at least 30 people had died in Andhra Pradesh due to a shortage.

The government's reply comes in the aftermath of the devastating second COVID-19 wave that overwhelmed the country's healthcare infrastructure and resulted in thousands of deaths daily. COVID-19 cases surged dangerously from April to June and peaked in May with over 4-lakh cases and 4,000 deaths.

Hospitals across the country reported severe oxygen shortages for several days and private hospitals in the national capital approached the High Court demanding a steady supply. Several hospital administrations in different states have alleged that the shortage of oxygen resulted in the death of several patients. (ANI)