Get latest articles and stories on India at LatestLY. Several Supreme Court lawyers once again on Monday received calls from various international numbers, allegedly from Sikhs for Justice (SFJ), that threatened the SC judges regarding Prime Minister Narendra Modi's security breach during his visit to Punjab on January 5, 2022. 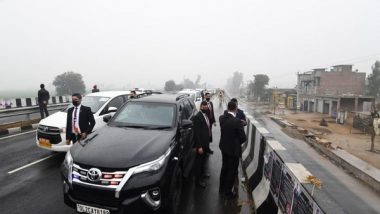 PM Modi's convoy stuck on a flyover in Punjab (Photo/ANI)

Also Read | Online Fraud in Pune: Woman Duped of Rs 62 Lakh by Man on Matrimonial Site Who Posed As Civil Engineer From UK.

Jain stated that he has received threat calls from the SFJ for filing complaints against them.

"They have further threatened the judges of SC. The pre-recorded calls, allegedly from the SFJ, reiterated its threat against Supreme Court lawyers that they will not allow SC to constitute a committee headed by retired SC judge Indu Malhotra to proceed with the inquiry into the PM's security breach in Punjab," he said in the complaint.

Other than Advocate Vishnu Shankar Jain, Advocates Apoorv Shukla and Nishant Katneshwarkar have also received calls from international numbers with pre-recorded audio, threatening them for lodging complaints against SFJ.

Recently, the Delhi Police has registered the First Information Report (FIR) under various sections of the Indian Penal Code (IPC) and Unlawful Activities (Prevention) Act (UAPA) on the basis of lawyers' complaints stating that they have received calls threatening judges over the case related to Prime Minister Security Lapse.

According to complainant lawyers, the FIR has been lodged under sections 153 (Wantonly giving provocation with intent to cause riot), 153A (Promoting enmity between different groups on grounds of religion, race, place of birth, residence, language, etc., and doing acts prejudicial to maintenance of harmony), 506 (Punishment for criminal intimidation) read with 13,16,18 and 20 of UAPA (Unlawful Activities (Prevention) Act).

According to the Supreme Court Advocate-On-Record Association (SCAORA) letter, the calls were made allegedly by a pro-Khalistan organisation Sikhs for Justice (SFJ).

SFJ is a US-based secessionist group that supports the secession of Punjab from India and formation of Khalistan. Founded and primarily headed by one Gurpatwant Singh Pannun, it was banned in India in 2019 as an unlawful association. (ANI)