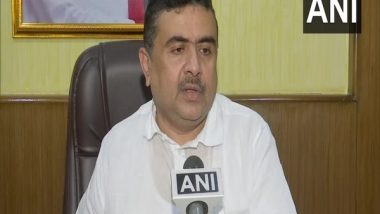 "I have written to Hon'ble PM Shri @narendramodi ji, requesting him to direct the officials of his good office to ensure protocols are followed and transparency is maintained by WB Govt before considering the issues raised by Hon'ble CM @MamataOfficial in her letter addressed to him," Adhikari tweeted.

A couple of days back Mamata Banerjee wrote a letter to PM Modi stating that the Central Government isn't releasing funds to West Bengal for MGNREGA and PMAY.

The CM requested PM Modi's immediate intervention and direction to the concerned Ministry to release the funds "without any further delay."

In the letter, Adhikari also requested that the Prime Minister should ask the West Bengal government to rename Bengal Awas Yojana to its original name Pradhan Mantri Awas Yojana.

"Pradhan Mantri Awas Yojana is the dream project of Prime Minister Narendra Modi where he promised concrete houses to everyone. The PM should ask the state to rename the scheme to its original name," read the letter.

Further, he claimed that the TMC-led West Bengal government is transferring MGNREGA funds to fake job cardholders and is trying to cheat the Central government by showing single work multiple times.

Adhikari also alleged that the Mamata Banerjee government is using machinery instead of hiring labourers to get the work done at a cheaper cost.

"MGNREGA has become the illegitimate source to fund the mid-level and low-level functionaries of the ruling party, TMC. Machinery is used instead of labourers to complete the work faster and in a cheaper way. Wages are transferred to fake job cardholders," the letter added.

West Bengal government and the BJP-led Central government have been at loggerheads over various issues for a long time.