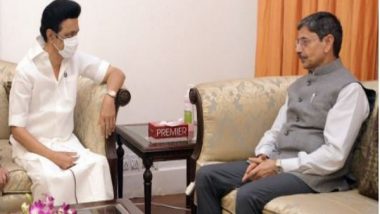 Stalin briefed the Governor about the rain situation and ongoing relief and restoration work in the rain-affected areas in the state.

As many as eight people have died due to heavy rainfall in the state, said the state revenue and disaster management minister KKSSR Ramachandran.

Two teams of the National Disaster Response Force (NDRF) have been deployed in Chinglepet and one in Kanchipuram.

Chennai Meteorological Department on Friday had given a red alert to all coastal districts till today and an orange alert to the adjacent districts. (ANI)