A week-long Indian mango promotion programme began on Friday in Bahrain where 16 varieties of the fruit, including the three Geographical Indications (GI) certified 'Khirsapati' and 'Lakshmanbhog' from West Bengal and Zardalu from Bihar are being displayed. 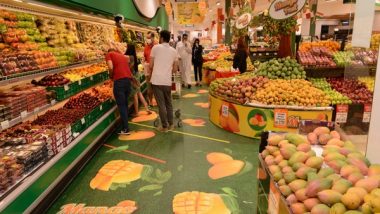 A visual from the fest in Bahrain (Image Source: Twitter).

New Delhi [India], June 11 (ANI): A week-long Indian mango promotion programme began on Friday in Bahrain where 16 varieties of the fruit, including the three Geographical Indications (GI) certified 'Khirsapati' and 'Lakshmanbhog' from West Bengal and Zardalu from Bihar are being displayed.

"The varieties of mangoes are currently being sold through 13 stores of the group in Bahrain. The mangoes were sourced from farmers in Bengal and Bihar by Agricultural and Processed Food Products Export and Development Authority (APEDA)-registered exporter," said a statement by the Central government.

"The festival has brought delicacy and delight of eastern India as 16 varieties of mangoes have made way to Bahraini market including three GI certified varieties- Khirsapati, Lakshmanbho (WestBengal), and Zardalu (Bihar)," tweeted Indian embassy in Bahrain.

"Indian Mango Fest oragnised by @aljazirabahrain @APEDADOC & @IndiaInBahrain has been inaugurated today. The fest will continue in different stores of @aljazirabahrain for one week. The Mango Fest is being celebrated as part of #AazadiKaAmritMahotsav #IndiaAt75," it added.

The Centre added that APEDA has been initiating measures to boost mango exports from the non-traditional regions and states. It has been conducting virtual buyer-seller meetings and festivals to promote exports of these mangoes.

"It recently organised a mango festival in Germany's Berlin. In a bid to increase mangoes exports to South Korea, APEDA in collaboration with the Indian embassy, Seoul, and Indian Chamber of Commerce in Korea, last month organised a Virtual Buyer Seller Meet," the statement further said.

For the first time in this season, India has shipped a consignment of 2.5 Metric Tonne (MTs) of Geographical Indication (GI) certified Banganapalli and other variety Survarnarekha mangoes sourced from farmers in Krishna and Chittor districts of Andhra Pradesh recently.

Mangoes are processed by the APEDA-registered packhouse facilities and then exported to various regions and countries including the Middle East, European Union, USA, Japan and South Korea. (ANI)