Bollywood actor Sonu Sood is bringing oxygen plants from France and other nations for installing them at various places in India. 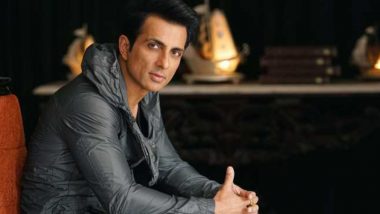 Bollywood actor Sonu Sood is bringing oxygen plants from France and other nations for installing them at various places in India. Sonu Sood is planning to install at least four of the oxygen plants in the worst-hit COVID-19 states of India, including Delhi and Maharashtra. "We have seen a lot of people suffering because of the unavailability of oxygen cylinders. We have got it now, and are already giving it to people. However, these oxygen plants will not only supply to entire hospitals but will also get these oxygen cylinders filled up, which will solve a major problem of the people suffering from Covid-19," said Sonu. Sonu Sood: Those Who Couldn’t Save Loved Ones, You Didn’t Fail, We Did.

According to an official release, the first plant has already been ordered and it will be arriving in 10 - 12 days from France. Bollywood actor and philanthropist Sonu Sood further said, "Time is the biggest challenge for us at the moment and we are working our best to make sure everything comes in time and we don't lose more lives". The second wave of coronavirus has infected many people, and the number of COVID-19 positive cases has been rapidly rising. Priyanka Chopra Hails Sonu Sood’s Free Education Idea For Kids Affected Due to COVID-19, Smriti Irani Drops Helpline No in the Comments Section.

Many Bollywood celebrities like Priyanka Chopra, Anushka Sharma, Amitabh Bachchan, Varun Dhawan, Akshay Kumar, and others have come forward to contribute in order to help aid people crippled by the COVID-19 pandemic in the country. Amid the surge in cases, many stars like Katrina Kaif, Taapsee Pannu, Alia Bhatt, Mira Rajput, Bhumi Pednekar, among others have been using social media to amplify the voices of those in need.

Earlier, Yash Raj Films also stepped forward and pledged to vaccinate the daily workers of the entire Hindi film industry. YRF also launched the 'Saathi' initiative to provide financial support to all the daily wage workers in Bollywood. Separately, on the film front, Sonu recently announced a new movie titled 'Kisaan', to be directed by E Niwas and backed by filmmaker Raaj Shaandilyaa. Apart from that, he will also be featured in Chiranjeevi starrer upcoming Telugu movie 'Acharya'.