Get latest articles and stories on Sports at LatestLY. It's a new beginning for the Indian women's team as they take on the massive challenge of representing a country of 1.3 billion dreams in the AFC Women's Asian Cup India 2022 in Mumbai. 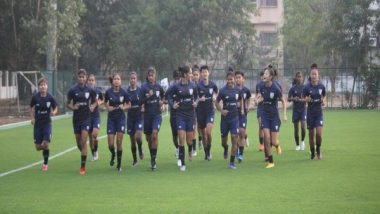 Mumbai (Maharashtra) [India], January 17 (ANI): It's a new beginning for the Indian women's team as they take on the massive challenge of representing a country of 1.3 billion dreams in the AFC Women's Asian Cup India 2022 in Mumbai.

While the initial target remains to reach the last eight stage, and give themselves a shot at qualifying for the FIFA Women's World Cup, the Indian team -- the youngest in Group A with an average age of 23.13, will look to its young players to come of age.

"We've got so many youngsters in our team. There are 20-year-olds, 18-19-year-olds, and even a 16-year-old. But playing for the senior team at this young an age means that you must come of age mentally. I think these youngsters that we have are very mature," said Sanju Yadav as per an AIFF release.

"Not everyone in a team will have the same physical capacity. But football is a game where mental aptitude is just as important, and these youngsters have shown a lot of that," she added.

20-year-old Manisha Kalyan feels that it has been a learning process for her in the senior team over the last few years.

"Every youngster has to adapt themselves to senior football, and it took me a couple of years of being on the fringes, after I was brought in from the U-19 team," said Manisha.

Manisha, who stole the headlines in November last year, with her goal against World No 7 side, Brazil, is not one resting on her laurels.

"That's all in the past. We don't know who will make the starting XI, or who will come on from the bench, but one thing we do know is that the coaches select us because of the players we are in the present, and nothing what we have done in the past," said Manisha.

"That goal against Brazil was a great moment personally, and I will look back from time to time in my low moments and try to take strength from it. But the Asian Cup is a much bigger stage. A good performance here could change Indian Football," she added.