Get latest articles and stories on Sports at LatestLY. Notably, the death toll from floods has crossed 1,000 in Pakistan and thousands more have been injured or displaced since June 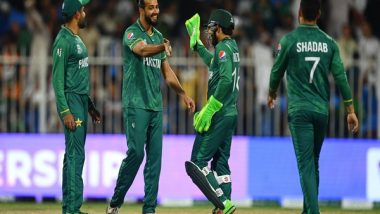 Dubai [UAE], August 28 (ANI): Pakistan cricket team will wear black armbands in their Asia Cup 2022 campaign opener against India to express their solidarity and support for flood-affected people across the country, Pakistan Cricket Board (PCB) said on Sunday.

"Pakistan cricket team will wear black armbands in their first match of ACC T20 Asia Cup 2022 against India today to express their solidarity and support for the flood affectees across the country," said a statement from PCB.

Notably, the death toll from floods has crossed 1,000 in Pakistan and thousands more have been injured or displaced since June.

At least 1,033 people have died while 1,527 have been injured since June 14 from the rains and floods, Geo News reported citing National Disaster Management Authority (NDMA).

As per the data, four died in Balochistan, six in Gilgit Baltistan, 31 in Khyber Pakhtunkhwa, and 76 in Sindh.

At least 110 districts of Pakistan have been hit by the floods with 72 of those districts declaring calamity hit, according to Geo News.

Pakistan is grappling with its worst natural disaster in over a decade. The floods affected the lives of millions of people after which the Pakistan government declared a "national emergency".

The NDMA shared that Pakistan's 30-year average showed that the country has received 134mm of rain and this year it received 388.7mm of rain. 190.07 per cent more than the average.On 26 August, the Pakistan Meteorological Department (PMD) Flood Forecasting Division (FFD) issued a warning that very high to exceptionally high-level flooding is expected in River Kabul at Nowshera in KP province, as well as in tributaries of the Kabul and Indus rivers until 28 August.

Coming to the match, Pakistan and India will start their respective Asia Cup campaign today when they face each other in a high-octane clash.

So far, both sides have locked horns on nine occasions in T20I matches. India has an edge overall, with wins in seven matches out of these. Pakistan has won only two.

But the last time these two met was during the ICC T20 World Cup 2021 back in October last year, in which India suffered a humiliating ten-wicket defeat. Left-arm pacer Shaheen Afridi destroyed the Indian top order with two quick strikes. Contributions from then-skipper Virat Kohli (57) and Rishabh Pant (39) took India to 151/7 in their 20 overs, but knocks from Mohammed Rizwan (79*) and Pakistani skipper Babar Azam (68*) meant that Men in Blue succumbed to a shocking defeat.

India will be looking forward to putting up a big fight this time around. They have been in fantastic form as of late, having defeated England and West Indies in their respective territories in ODI and T20I series. They are also the number one side in T20Is.

Coming to Pakistan, they are the third-ranked side in ICC T20I rankings and are not to be taken lightly.