Get latest articles and stories on Sports at LatestLY. Scotland and Sri Lanka completed impressive victories on Saturday in the ICC Commonwealth Games Qualifier 2022 being played at the Kinrara Oval in Kuala Lumpur. 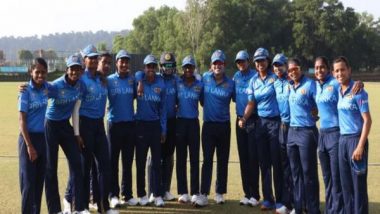 Quick cameos from Abbi Aitken-Drummond and Kathryn Bryce propelled Scotland to 70 in a rain-reduced eight-over-a-side fixture before their bowlers restricted Kenya at the death to deliver a 16-run win.

Winning the toss, Kenya elected to bowl. Sarah Bryce scored back-to-back boundaries kicking things off but got out scoring eight off three balls.

A fine partnership of 38 between Abbi Aitken (21) and Kathryn Bryce (27) helped Scotland put up a challenging target.

Scotland scored 15 in the final over and ended with 70 for three. Kenya's opening batter, Q. Abel had a blazing start with consecutive boundaries. She, however, surrendered to Fraser in the second over. Fraser wasted no time in sending Veronica Abuga back to the pavilion on the very next ball. Sarah Wetoto then scored 24 not out and Sharon Juma got 10.

"It is always difficult knowing what a good target is in a reduced game, so our plan was just to go out there play positively and assess as we went on. I think our bowling performance today was much more consistent and we bowled more to our fields," captain and Player of the Match Kathryn Bryce said as per an official ICC release.

Margaret Banja attributed Kenya's loss to a slow start: "We did not take full advantage of the power-play and lost two quick wickets. We did not build partnerships in the initial stages and we gave out too many boundaries."

On the other hand, Malaysia won the toss and elected to field. The experienced Sri Lankan team put up an imposing 175, and as expected, skipper Chamari Athapaththu handed a great start to Sri Lanka by scoring 30 off 17 balls.

After Athapaththu's departure, Harshita took control and scored a commendable 65 of f42. She was ably supported by Nilakshi De Silva, who scored 49 off 31.

Chasing a mammoth 175, Malaysia lost opener Wan Julia with no runs scored. Captain Winifred was the only batter who managed to play well, compiling 42.

Sri Lanka's Sugandika Dasanayaka and Oshadhi Ranasinghe went on to deliver top notch bowling by taking two wickets each, giving away 12 and 14 runs, respectively. Malaysia could only manage 82, losing by 93 runs.

Athapaththu said she was disappointed not to get a big score this time. "But I had complete confidence in my batters and knew they would get us a respectable score." (ANI)